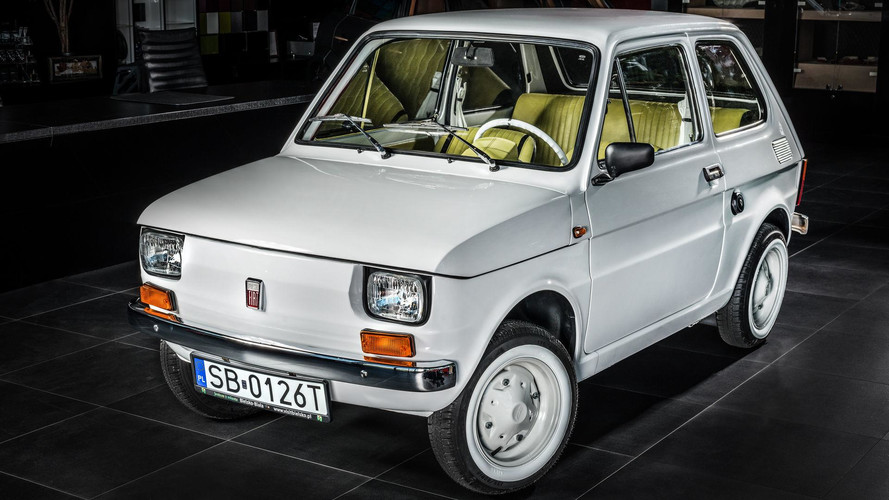 The luxurious little Fiat should offer just enough room for him and wife Rita Wilson.

In addition to being a great actor, Tom Hanks maintains quite an entertaining Twitter account, and one of his ongoing gags is posing next to a vehicle with the message, “I got a new car!” After he posted multiple photos with the Fiat 126p in 2016, Monika Jaskólska decided the star needed one of his own.

Polski Fiat built the 126p in Bielsko-Biała, Poland, and Jaskólska has been raising money for the Bielsko-Biała Pediatric Hospital for years. She saw an opportunity to connect the two with a star actor and organized a charity event.

The organizers of this odd undertaking started with a rather beat-up, turquoise 126p dating from before 1975. A restorer donated its time to bring the car back to life, and Carlex Design contributed an overhauled interior for the little machine.

This 126p now has the nicest cabin of any example in the world. Carlex claims the interior now uses “light green leather,” although the shade looks closer to yellow to us. There’s exposed stitching and contrasting black leather stripes. The buttons and switches feature silver flake and purposefully look like typewriter keys because Hanks collects vintage typewriters. The resin gearshift knob features Bielsko-Biała’s city symbol inside of it. On the back of the front seats, custom leather cases identify the car as a 126p on the driver’s side and has the message “Bielsko-Biała for Tom Hanks” on the passenger side. The words also appear below the speedometer.

“It was a pleasure and an honor to be a part of the project for two very important reasons: the fact that it was a charity event, and that the 'Maluch' has always been a symbol of our city, our country, and our youth,” Damian Skotnicki, owner of Carlex Design, said in the company's release. “Each Pole has a number of great memories connected to driving a Fiat 126p.”

Jaskólska unveiled Hanks’ 126p to the public on July 9 at an event that attracted thousands of people, plus lots of vintage Fiats. The money raised went to the Bielsko-Biała Pediatric Hospital. There’s no word yet about when Hanks takes delivery of it.

Check out 70 images of this cool hatchback in the gallery below.

”Bielsko-Biała for Tom Hanks” is one of the charity events organised by Monika Jaskólska, a
philanthropist, who for many years has been raising funds for the Bielsko-Biała Paediatric
Hospital. A few months ago, she saw a picture with Tom Hanks and the “Maluch”, published
on a social media website, which inspired her to start raising money to purchase
and restore a Fiat 126p, and then hand it over to Hanks. The entire idea revolved around
charity, attracting a lot of publicity and enthusiasm of the media and, what is most important,
of Tom Hanks himself.

The project was supported by a number of individuals and companies: Rafał Sonik, who
funded the car; BB Oldtimer Garage, a company that took up the challenge to restore the
car; and Carlex Design, that designed and manufactured its brand new interior. Obviously,
the companies participated in the car’s conversion free of charge.

“It was a pleasure and an honour to be a part of the project for two very important reasons:
the fact that it was a charity event, and that the “Maluch” has always been a symbol
of our city, our country, and our youth. Each Pole has a number of great memories connected
to driving a Fiat 126p,” says Damian Skotnicki, owner of Carlex Design.

The car’s new interior alludes to the logo of the city of Bielsko-Biała in terms of its colour
and motifs. It represents a classic vintage style, as the designers’ goal was to maintain and
emphasise the original look of the Fiat 126p. The seats and the bench have been upholstered
with light green leather, and a characteristic stitching for this specific make has been
applied.

One of the key stages of the execution of the project was to work out the details of the
interior, which were eventually artfully mastered in the Carlex Design jewellery atelier. The
buttons and switchers resemble those of a typewriter, a gimmick that was used on purpose,
as Tom Hanks collects typewriters. All these elements have been plated with silver flakes.
There are even more elements connected to Bielsko-Biała, such as the laser engraved
logos on the seat covers, the coloured seams, or the impressive gear knob handle made of
resin, featuring the symbol of the city inside it.

“It took us three weeks to work out the car’s interior, including the designing stage; the
entire initiative involved eight people, including our jewellery atelier artists, who were
involved in the process. Mastering such parts requires precision and diligence. The project
was of extreme importance for all us, and we put all our energy and effort into it,” admits
Tomasz Krawczyk, Carlex Design Sales Department Manager.

At the moment, the “Maluch” is probably the most famous automotive and social project
in Poland. It was released to the public on 9 July 2017 and attracted a few thousand car
enthusiasts. All the funds raised during the event will be transferred to the Bielsko-Biała
Paediatric Hospital.