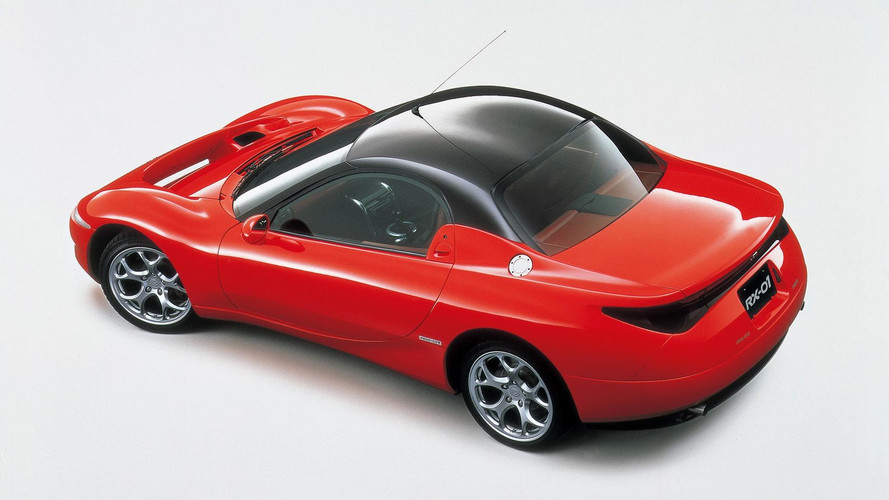 Because Mazda wanted to rekindle the magic of the first-generation RX-7 by taking a back-to-basics approach.

With multiple contradicting reports about a new sports car to act as a spiritual successor of the RX-7, for this week’s Concept We Forgot article we have decided to go back in time 22 years ago when Mazda had an idea to revive the philosophy behind the original model. In 1995 at the Tokyo Motor Show, the Zoom-Zoom company unveiled what was supposed to replace the third-generation RX-7.

Significantly different than the RX-7 of those days, the concept was envisaged as a smaller, lighter sports car in the same vein as the original RX-7 sold between 1978 and 1985. Had it gone into production, the sports car featuring 2+2 seating would have had a significantly lower price tag.

It was engineered with a then new naturally aspirated rotary engine, thus ditching the biturbo setup of the RX-7. The small engine was mounted low behind the front axle to enable a low center of gravity and at the same time allow Mazda’s engineers to come up with an interesting front fascia featuring a large built-in spoiler.

Other Mazda concepts from the series:

Weight distribution was important during the development process, with the engineers deciding to install the battery and fuel tank over the rear axle. Underbody spoilers and an integrated rear spoiler were implemented to create an aerodynamic body.

Unfortunately, the RX-01 was a fatality of bad timing combined with financial issues. Demand for sports cars had declined and money was tight for Mazda, which back then was in cahoots with Ford. As a consequence, the concept was sadly declared D.O.A.

Will we ever see a new RX-7 / RX-8? Time will tell. Latest intel suggests a rotary-powered Mazda inspired by the gorgeous RX-Vision concept is pinned for 2020 when the company will celebrate its centenary.