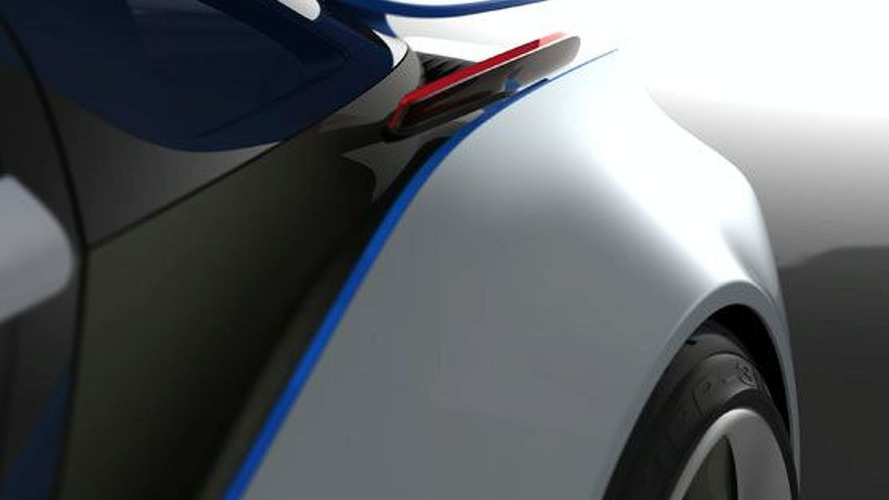 Following a rather perplexing teaser video of the eagerly anticipated Vision EfficientDynamics Concept, BMW has settled our nerves by revealing a second teaser photo.

Following a rather perplexing teaser video of the eagerly anticipated Vision EfficientDynamics Concept, BMW has settled our nerves by revealing a second teaser photo.  The new teaser image puts into perspective the first image of the passenger side rear quarter panel area with a flowing blue spoiler of sorts and red LED tailamp. This second image shows the driver's side quarter panel while viewing from the side.

A source close to BMW told WCF that the Vision EfficientDynamics concept is a supercar utilizing a small diesel hybrid engine producing approximately 800Nm and an average fuel consumption figure of approximately 3.5 litres per 100km (67.2 mpg US / 80.7 mpg UK). They say it will be able to go from 0 - 100km/h in under 5 seconds. If these numbers are remotely true, BMW is certainly not exaggerating when they call it a "new revolutionary concept car with BMW EfficientDynamics technology."

Revealed on IAAblog.com, the newly launched website is an official BMW-Blog dedicated for the coverage of the IAA, Frankfurt Motor Show which takes place in just three weeks.  A BMW official writes, "We will cover all the BMW- and MINI-Stuff during the next weeks and will feature exclusive content. But we'll also show the other Car-Highlights from the Motor Show since mid August, and also live, starting from 14th September."