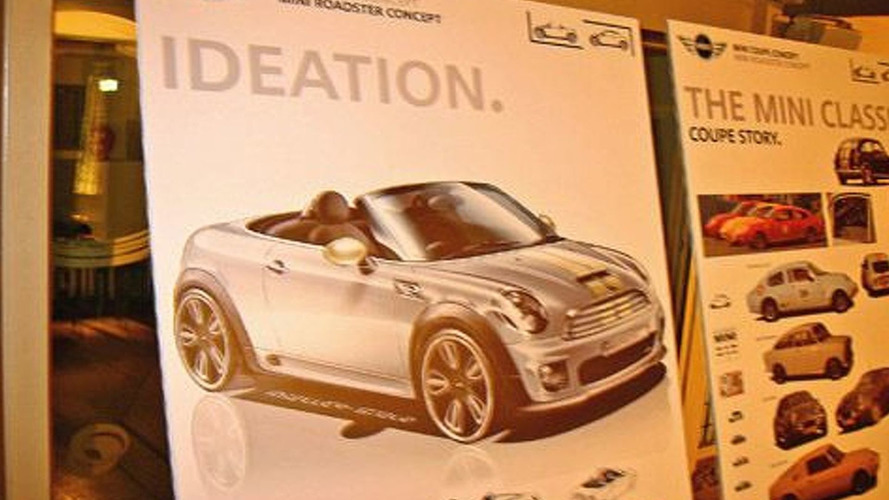 A sketch of the MINI Speedster Concept has appeared. The car is but one of several models under consideration for the brand. These include the Crossover SUV and a Coupe.

MINI insiders have told InsideLine that the brand is exploring several new models within the range. One of these is the Roadster whose concept version (pictured) is set to share the Frankfurt stage in less than three weeks with the recently revealed MINI Coupe concept. According to a MINI communications official in Munich, "both cars will be produced for the 2011 model year and both will be available on all our world markets." Additionally, these two will spawn even more future models themselves.

About a year ago we saw the MINI Crossover Concept being revealed. The small SUV should have been in production by now but apparently executives have pushed back its release in order to gauge public reaction to these aforementioned concepts first. But the Crossover will eventually get built, as a 2011 model.

As previously reported, MINI will no longer be the baby brand at BMW Group. Speculated to be under the "i-Setta" name, the new BMW brand will produce a new-generation Isetta or "Megacity" vehicle which would serve as the entry point for the premium marque.  Simultaneously, an even tinier MINI sub-compact car range based on the second generation MINI Coupe and Roadster would be included in a three-way architecture swap with a future Toyota iQ.

Fifty years after Mini production began in Oxford following Sir Alex Issigonis's first sketch done on a cocktail napkin while in Nice, the label is growing models exponentially in ways that perhaps even he had never imagined.