McLaren P11 spied at the Nürburgring 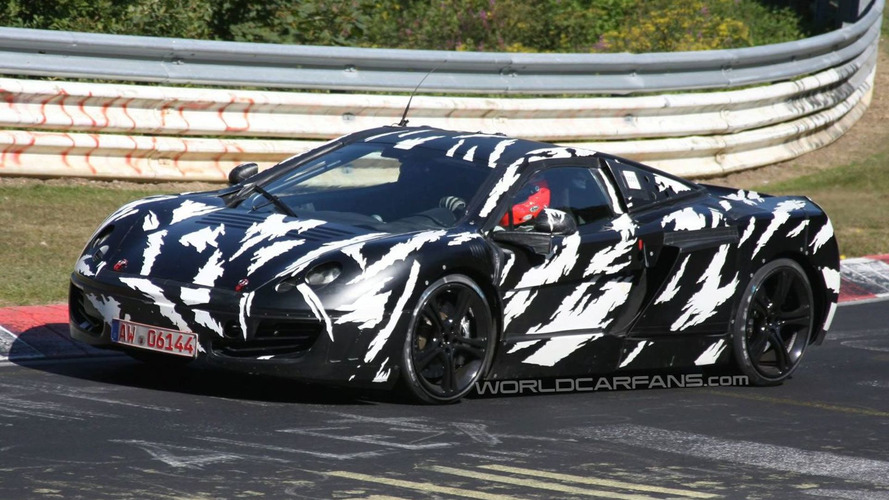 P11 is set to compete with upcoming Ferrari 458 Italia. The P11 is McLaren's replacement for the SLR and will likely come fitted with a Mercedes-supplied V8 engine with about 550 hp and an F1-derived sequential gearbox.

These are the latest spy shots to be had of McLaren's new supercar, the tentatively named P11, doing some high-speed testing on the Nürburgring Nordschleife track.

The car is still hidden under some pretty elaborate camouflaging, so it's hard to say what this will end up looking like. We get a slightly better look at the front bumper than we've had before, and those large, gill-like air intakes seem to promise serious performance.

The P11 is a mid-engine, two-seater supercar with a top-mounted exhaust system set to replace the SLR and become a competitor to Ferrari's own upcoming F458 Italia and the Lamborghini Gallardo - an Olympian set of rivals to be sure. The car will likely come with a Mercedes V8 engine with something in the range of about 550 hp coupled to an F1-derived sequential gearbox. McLaren has voiced its intentions to make its cars more enviro-friendly and may also introduce a Kinetic Energy Recovery Systems (KERS) to the car to make it more fuel efficient.

Initially, McLaren plans to produce 1,000 P11s in 2011, and perhaps more each year after that. No debut date has yet been set.