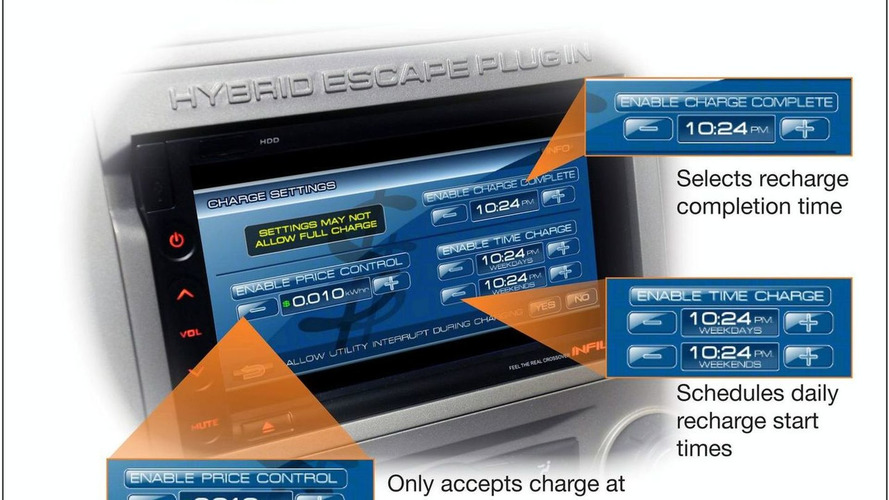 Owners of Ford hybrids and electric vehicles could be able to instruct their cars to only recharge their batteries during certain times, thus alleviating the grid from undue pressure and saving them money.

For the past two years Ford and some of its partners have been developing a new communications and control system that will interface between near-future electric-powered vehicles and the electric grid in North America. The system was being tested to make it possible for plug-in cars of all types to be programmed by their owners to only charge up at the owners' convenience.

An example is that the owner could "tell" the car to only accept a recharge late at night or early in the morning when the grid is not too busy and rates are possibly lower, or even when the grid is using renewable energy sources like wind power.

"We are designing what plug-in hybrids and battery electric vehicles will be capable of in the future," said Greg Frenette, manager of Ford's Battery Electric Vehicle Applications. "Direct communication between vehicles and the grid can only be accomplished through collaboration between automakers and utility companies, which Ford and its partners are demonstrating with this technology."

The system will build on Ford's advancements such as SYNC, SmartGauge with EcoGuide and Ford Work Solutions. Partners working with the automaker include the Electric Power Research Institute (EPRI), the U.S. Department of Energy, Southern California Edison, Pepco Holdings and Hydro-Québec, the largest electricity generator in Canada.