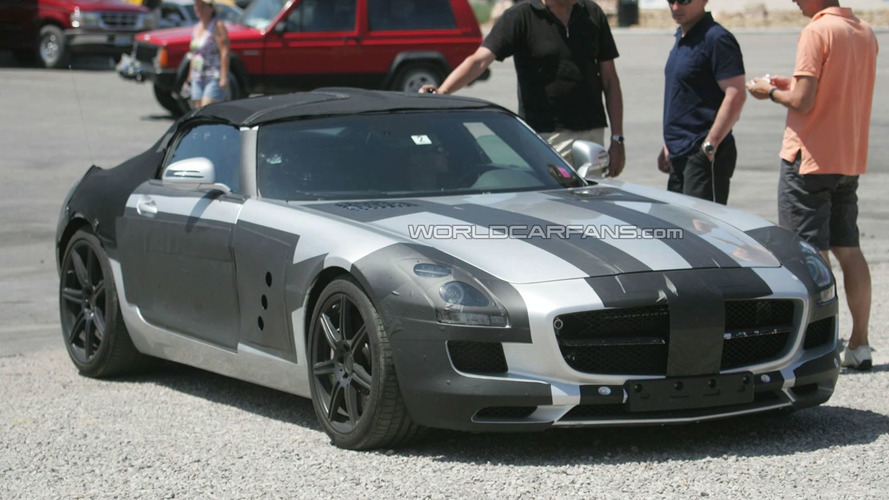 It was hot weather testing time in the California desert for the Mercedes-Benz SLS AMG convertible. From our spy report it looks like the doors will be conventional, thus losing this version its "gullwing" status.

Looks like Mercedes-Benz is planning a whole range of models for its upcoming SLS AMG supercar. The petrol coupe has been somewhat detailed and a confirmed electric drive version is in the works. Now the convertible has been caught testing in the heat of the California desert.

Spies saw clues of a retractable roof despite the heavy camouflage and doors that look like they are conventional. That means the SLS convertible will lose its "gullwing" status if these remain as they are on the spied prototype. The normal door handles are further pointers to a standard ingress and egress system, as opposed to the coupe's low-mounted ones.

Mercedes-Benz has engineered the SLS to counter its perceived lack of grunt - 420kW/ 571hp which isn't exactly a mind-blowing supercar figure, by minimising weight gains. The coupe is said to accelerate from 0 - 100km/h in 3.8 seconds and top off at 315km/h. Convertibles are normally a little slower than their hard-top counterparts so the same is expected of this one.

The SLS should be making an appearance at the Frankfurt Motor Show in just over a month.