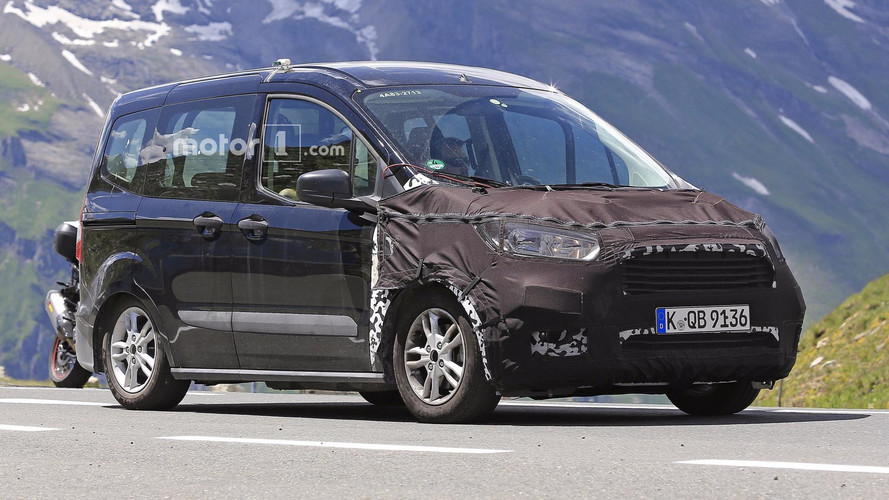 Getting ready for a debut later this year.

Ford’s smallest cargo and passenger van, the Tourneo Courier, was first launched in 2013 following its debut in Geneva and is now almost four years old. This means it’s in a desperate need of a facelift, which, most likely, will arrive this fall at the Frankfurt show.

Our photographers spied the model twice last year, in October and December, and now we have another fresh batch of spy photos. Interestingly, while getting closer to its debut, the refreshed vehicle is getting even more camouflage then before – in addition to the zebra-style foil, there’s now an extra layer of cloth disguise hiding what appear to be some additional sensors.

No major visual changes are expected, apart from some revisions to the front end which will receive a new radiator grille, a bit more defined headlights, and slightly reshaped bumper. Judging by the lack of camouflage on the side panels and the rear end, no changes are planned for those details of the van.

As far as the cabin is concerned, we don’t have spy photos of the interior yet, but we expect to see some revisions in the same vain as the facelifted Tourneo Custom people mover. This means that higher-quality materials will be used, as well as Ford's third generation SYNC infotainment system with new tablet-style display on the center console. However, at the moment, we can’t be entirely certain those upgrades will be introduced for the Tourneo Courier.