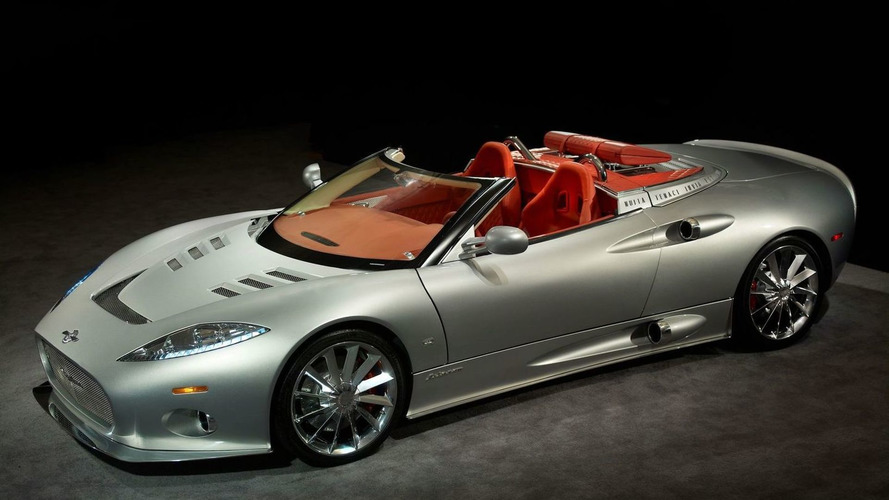 Spyker's C8 Aileron Spyder has made its world debut at the Pebble Beach Concours d'Elegance. Featuring a retractable soft roof and a 4.2-litre Audi V8, the Spyder is highly customisable. Production starts in 2010.

During the 2009 Geneva International Motor Show Dutch sports car maker Spyker introduced the world to the new second generation C8 Aileron. At the same venue the company announced it was developing a convertible Spyder model and this very car has now been unveiled at the 59th Pebble Beach Concours d'Elegance this Sunday.

Armed with an Audi-sourced 4.2-litre V8 engine, the C8 Aileron Spyder can make 298kW (405hp) and peak torque of 480Nm at 3400rpm. Its 0 - 60mph sprint time is stated as 4.5 seconds while top speed is 300km/h (187mph). The standard transmission is a 6-speed manual box but a new ZF 6-speed automatic is available as an option. Both transfer power to the rear wheels via a limited slip differential.

The Spyder is made of a light aluminium body construction and is differentiated through the new electro-hydraulic soft-top roof mechanism. The roof has a glass rear window and can be ordered in one of eight colours. Its exterior look is inspired by Spyker's heritage in aviation. Past front end design attributes dominated by the shark-like gills have been replaced by a cleaner look. The front grille is larger and the rear features LED lighting technology. Nineteen inch alloys are rolled inside 235/35 front tyres and rubber of up to 295/30 size at the rear.

The body itself is available in 16 different colours while inside a choice of 14 leather colours will be sold. Buyers can of course customise their own colours should these not please them enough.

Aluminium is used extensively for the dashboard which houses a new in-car entertainment system led by the new exclusive Kharma sound system. Other features include iPod and Bluetooth connectivity as well as satellite navigation.

Spyker has made the suspension stiffer for better handling but has also tuned it to minimise unwanted excessive cabin noise and vibration.

Production of the C8 Aileron Spyder starts in the first half of 2010.