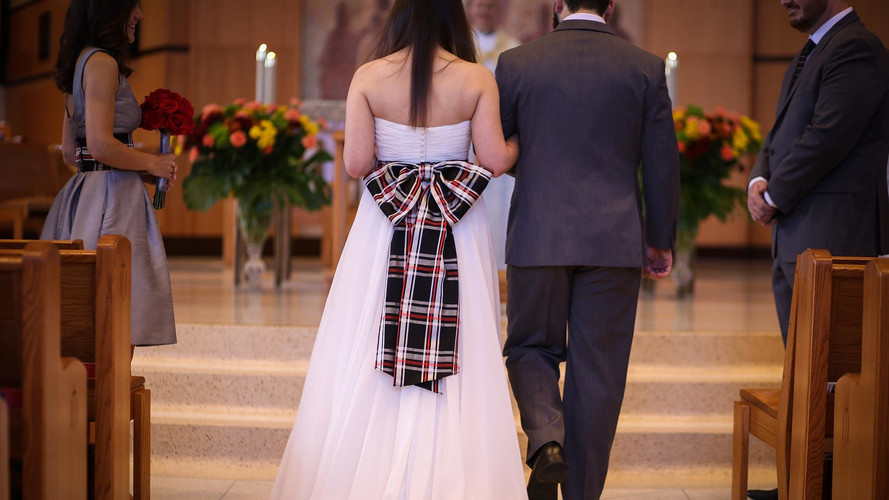 Agnes and AJ Miragliotta met because of their shared passion for the Volkswagen GTI, so it only made sense to make the car a part of their wedding.

The Volkswagen GTI stands as the benchmark of the hot hatch segment. While some competitors are quicker, the performance-oriented variant of the Golf continues to offer an impressive mix of power, luxury, and affordability. The potent combination gives the model a loyal fan following. Two of them – Agnes and AJ Miragliotta – used their favorite car as the theme for their wedding last fall.

The couple met in 2015 when Agnes sold a set of GTI taillights to AJ. They started talking through a VW enthusiast group on Facebook, and one of their dates even involved taking their GTIs to a local park for a photo shoot. Their shared passion for hot hatches was the spark that led to them marrying.

Both of them have been longtime GTI fans. AJ owns a Mk5 model, and Agnes has a customized Mk6 model with green, powder-coated wheels that she calls the TurboTurtle.

“Simply put, the GTI led us to finding each other. So, it made perfect sense to create an ode to Volkswagen as a match-making brand,” she told Volkswagen.

Agnes planned the wedding, and she made sure there were a ton of nods to her favorite car. The bride sourced tartan fabric like their GTI’s cabins, and a seamstress used it for making AJ’s vest and the bow for her dress. Their wedding rings’ color take inspiration from their first Mk5s – Black Magic Pearl for him and Reflex Silver for her, and a red stripe on both. The groomsmen wore plaid ties, too.

The reception included even more VW-related touches. For example, the centerpieces included die cast GTIs, and one of the cakes featured a tartan exterior. Agnes also created custom “GTI Do” menus for the meal.

“The TurboTurtle has seen over 106,000 miles of hills, valleys, prairies and canyons. And no matter how large our family grows, it will remain an essential member,” Agnes told VW.

Agnes and AJ Miragliotta run their own visual media company, Waxwing Media, in Dallas. Well before they met in 2015, both had grown into avid fans of the Volkswagen Golf GTI – with AJ owning a Mk5, and Agnes driving her customized Mk6 GTI she calls the “TurboTurtle.”

That shared passion led to their meeting and their relationship, so when the duo took their vows last fall, they did so in a way that weaved their enthusiasm into the fabric of their lives. We asked Agnes to give us some insight into how it all came together.

VW Newsroom: Thanks for talking to us. First off – you and your husband work together?

Agnes: As of February, I’ve been building up a little company with my husband offering photography, post production and visual arts services. I’ve got more than five years of broadcast media and roughly a lifetime of traditional art experience under my belt. Coupled with my husband’s decade of photography prowess, we had often talked about starting our own multimedia company, but it wasn’t until we got married and found ourselves without jobs (AJ got laid off from his job a week before the wedding, I got laid off a week after) that we decided it was time to make it a reality. Everything – our career paths, our VWs, our whole story – it’s all about timing.

A:The GTI began as somewhat of a happy accident for both myself and AJ, two roads running alongside each other until they finally met. I was introduced to the model while looking for a new car in October of 2014, and though I initially had my sights set on another brand in the Volkswagen Group family, I couldn’t resist taking a ’08 GTI for a spin. It was love at first DSG shift.

Fast forward to late summer of 2015 – through the unfortunate loss of the first car I’d ever babied to no end, and the purchase of my current candy white 2010 GTI – when I reluctantly sold its precious tail lights (relics, really) to a certain fellow GTI owner. We’d connected through a Volkswagen enthusiast group on Facebook, and with an immense amount of patience, trust, and a shared automotive passion, the man who I’d eventually marry had accomplished the impossible task of pulling me out of my shell.

The day I knew we were meant to be, we’d taken our Mk5 and Mk6 to the park for a little photo shoot. Fast forward 354 days later, we said “GTI do!”

VW: How have you customized your car?

A: I’ll have to say here, a little distinction and personal touch can go a long way! I had the wheels powder-coated a shimmering green by a local talented specialist. As far as performance goes, I’m a proponent of ensuring that the stock parts run like clockwork… though I will admit to splurging on new coils for a little extra vroom-vroom and a few other tune ups for more presence out on the road among all of the monster trucks here in Texas.

VW: What gave you the idea to put a GTI theme in your wedding?

A: Simply put, the GTI led us to finding each other. So, it made perfect sense to create an ode to Volkswagen as a match-making brand. I’m not a super feminine gal to begin with, and the automotive take on the ceremony made me feel much more at ease.

VW: How did you pull it off?

A: Everything from the wedding announcement to the table decor had to reflect the brand, and it was actually quite fun coming up with the ideas. Without a budget for a wedding planner, I was left to my own devices. I coordinated with our reception venue to have custom menus printed and we peppered the tables with die-cast GTI model cars, which were a definite hit with the guests’ kids! Plaid fabric reminiscent of the Mk5 and Mk6 interiors was ordered all the way from Mexico so that our seamstress could work her magic in creating AJ’s vest and belts for myself and the bridesmaids.

The groomsmen received plaid-printed ties and even the cake was similar to GTI plaid, of course. The rings? Both symbolize our first Mk5s, his a black magic pearl, mine a reflex silver, both with that little red stripe cutting through the center. Our flower girl had a blast walking down the aisle with a bouquet of red plush VW daisies in her hand, and the classy little ring bearer was rewarded with a VW stuffed animal for his service. And last but certainly not least, the TurboTurtle was the perfect getaway car.

VW: How receptive was your fiancé to the idea?

A: I don’t think we even thought twice about it. It seemed ingrained from the beginning. He did after all, propose while wearing his GTI soft-shell jacket…

VW: What plans do you have for your GTI in the future?

A: Preventative maintenance and plenty of love and coddling should keep the GTI peppy for years to come. The TurboTurtle has seen over 106,000 miles of hills, valleys, prairies and canyons. And no matter how large our family grows, it will remain an essential member.