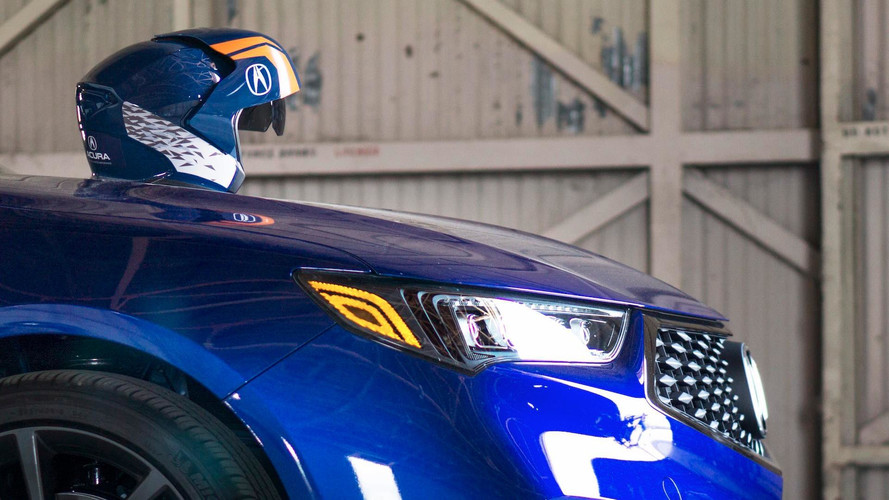 It kicks off tonight at 8PM eastern time.

For the first time ever attempted – as far as we know – Acura will host a race that uses augmented reality technology. Together with AR production experts at Current Studios, the company will call upon four celebrity challengers to see who can clock the fastest time in a three-lap time trial on a real track, with some augmented reality obstacles in their way, of course.

Featured drivers for the race include actor Zachary Levi, Sam Gorski, founder of Corridor Digital, Dom Esposito, journalist and YouTube influencer, and Maude garrett, TV host and radio host. NSX GT3 driver Ryan Eversley and actor Bradley Hasemeyer will host the event, and it will all be streamed live over Facebook.

So here’s how it works. Each driver will be equipped with special augmented reality helmets and a brand-new 2018 Acura TLX A-Spec. The helmets will display an augmented reality course to the driver via a high-definition screen, each with their own set of visual cues and obstacles, that each competitor has to navigate in an effort to finish with the fastest lap time.

The entirety of the race, including the augmented reality aspects, will be visible to viewers via helmet-mounted cameras in car, and a number of additional cameras mounted throughout the course. The race is just the latest installment in Acura’s "What A Ride" marketing campaign.

Those interested in watching the events unfold live can tune in tonight at 8 PM eastern time on YouTube, Facebook, and Twitter. The Facebook Live audience will even be able to assist drivers by offering hints and tips. Acura says the user interaction will transform viewers into a sort of virtual pit crew.

"What a Race" featured drivers include: Tony nominated actor Zachary Levi, best known for his roles in "Chuck" and "Thor the Dark World" as well as his Broadway run for "She Loves Me", Sam Gorski (creative visionary and founder of Corridor Digital), Dom Esposito (technology journalist and YouTube influencer), Maude Garrett (TV and radio host, creator of the website Geek Bomb!) along with hosts Ryan Eversley (NSX GT3 racecar driver for the RealTime Racing Acura team) and Bradley Hasemeyer (Actor, TV Host, Author).

The race is the latest installment in the Acura "What a Ride" marketing campaign in support of the new 2018 TLX, and will be broadcast live from the Acura Facebook, Twitter and YouTube pages where it will remain in its entirety following the competition. Additionally the technology influencers will also host the livestream on their respective Facebook pages to further engage fans on their channels.

The "What a Race" AR Experience
From behind the wheel of the new 2018 TLX A-Spec with SH-AWD, the four influencers will compete in the "What a Race" AR experience, challenging one another for the fastest overall time during 3-lap individual runs. Each lap will trigger a new AR course visible to the driver and the Facebook Live audience, with a unique set of visuals and obstacles that will task the Acura TLX A-Spec's precise handling to overcome. Cameras mounted to the drivers' helmets will bring viewers directly in on the action, and several additional cameras positioned throughout the racecourse will provide excitement from multiple perspectives of the race.

For those who tune in live on Facebook, "What A Race" will be much more than a passive viewing experience. As the first crowd-controlled, live rendered AR journey, viewers will play an active role in the race and serve as a virtual pit crew. Prompts will encourage fans to use reaction emojis throughout the race, revealing shortcuts and clearing obstacles to influence the course's landscape and help the drivers succeed, providing an exhilarating experience for everyone involved.

World's First AR Helmet Technology
"What a Race" drivers will each sport custom-built race helmets with augmented reality technology embedded in the extra-wide visor, allowing for an unprecedented full-color HD 80-degree viewing experience. The race helmets are a world's first assembly of technical precision: the foundation is a racing helmet used for general driver protection and safety, while an HD screen with mirrored lens technology has been added for an expanded field of view, along with a gyroscope to monitor head location within the car. The helmets are connected to a computer in the rear seats that provide the high performance rendering capacity needed to keep the experience running smoothly and visually sharp at high speeds – all powered by the Acura TLX.

AR Performance at Work
Acura teamed up with AR production experts at Current Studios to concept and execute the "What A Race" experience. The team patched into the TLX's ABS system to accurately track the vehicle's wheel speed and direction. To further mitigate any potential technical snafus during the race, the team custom fabricated a device attached to the under carriage of the vehicle, allowing the location of the car in the AR world to be automatically reset remotely and quickly, as needed.

Tune-In to "What A Race"
Viewers can tune-in to "What A Race" by visiting Acura on Facebook: http://www.facebook.com/acura, Twitter: http://www.twitter.com/acura and YouTube: http://www.youtube.com/acura. The event will air at 5pm PT/8pm ET on Monday, July 10, 2017, and the expected duration is approximately one hour. After the event, the race will live in its entirety on Acura's social channels.