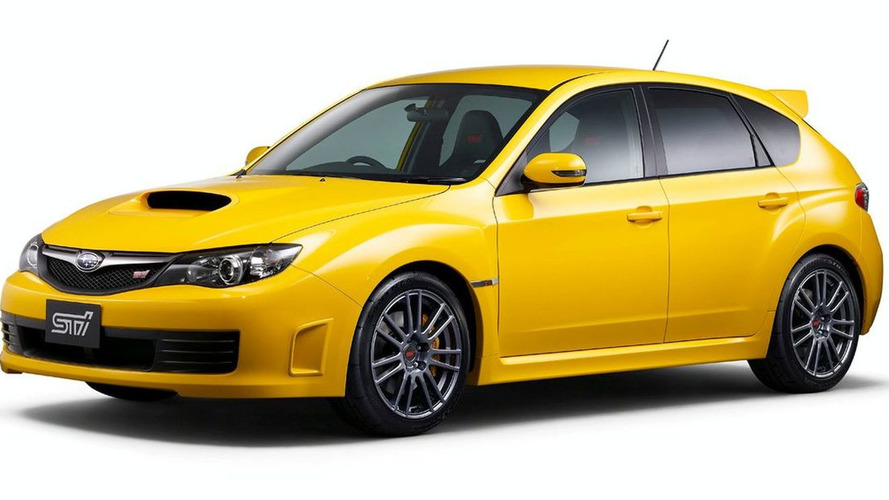 Today is the official launch date of the Subaru Impreza WRX STi spec C. The car features an increase in torque and a lighter body.

Some of the improvements include an unspecified weight reduction, previously rumored to be in the range of 70kg.  Subaru attributes the lowered weight to the use of a smaller battery, an aluminum engine hood, and laminar glass on front and side windows.  18-inch lightweight alloys come standard, although 17-inch alloys are available as an option.  The wheels have seven double spokes, and are wrapped in Bridgestone Potenza RE070 tires which improve cornering, and increase grip.  It appears the car does not come with a spare tire, with Subaru instead giving customers a flat tire repair kit.

One of the performance enhancements seen on the spec C is a newly tuned Engine Control Unit.  The car also features a redesigned turbocharger that uses new ball and axle bearings.  These changes boost torque to 422 Nm, while the car still maintains 305 horsepower.  Engine stability is supposedly improved through the use of a "inter-cooler water spray."  Meanwhile the rear Limited Slip Differential was switched to a mechanical unit to improve traction in the corners.  Subaru also optimized the suspension, springs, and fuel pump.  Alcantara and leather mixed Recaro seats are available as an option.

Officially, the car comes in either Pure White or Sunrise Yellow, but the photos include a version in blue.  All Subaru Impreza WRX STI spec C models comes standard with gold Brembo brake calipers.  Previous rumors of a blacked out rear spoiler appear to be inaccurate.  This edition is limited to 900 units, and pricing has not been released.