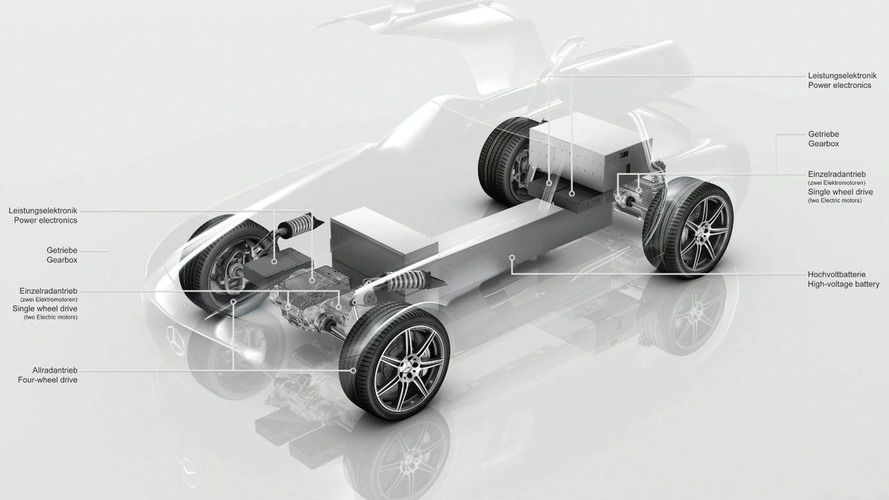 Mercedes has officially confirmed our earlier report, which indicated the company was going to produce an electric version of the SLS AMG Gullwing.

According to Mercedes, the four electric motors are positioned near the wheels and are connected via one transmission per axle. This unique setup effectively gives the SLS AMG eDrive an intelligent all-wheel-drive system which optimizes power to each individual wheel.

The center tunnel of the SLS eDrive is dominated by a massive liquid-cooled high-voltage lithium-ion battery that has an energy content of 48 kWh and a capacity of 40 Ah (at 400 V). While details are still limited, the battery is recharged via a plug-in system as well as regenerative braking.

Since Mercedes planned to produce an electric SLS from an early standpoint, the company engineered the car so that the low center of gravity and balanced weight distribution would remain virtually identical to the petrol powered variant. The foresight also allows Mercedes to build the electric SLS without making any changes to the car's aluminum spaceframe.

In a statement, Mercedes-AMG GmbH's CEO Volker Mornhinweg said, "With the SLS AMG with electric drive, we wanted to redefine the super sports car. For us, it is not just about responsibility. We attach just as much importance to excitement and classic AMG performance."