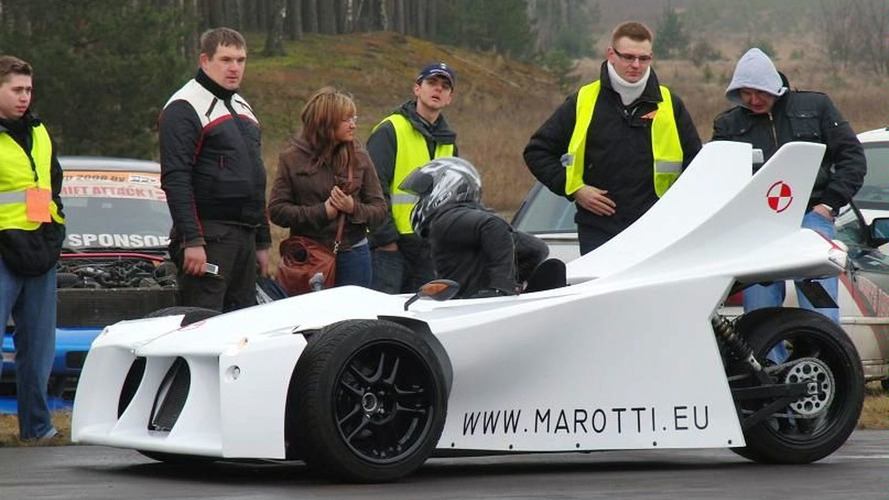 Beautiful sports car, or ugly three-wheeler? A new video of the Marotti car/cycle concept has just been released.

To call the Marotti three-wheeled concept car "unusual looking" is a massive understatement.  A new video of the airplane-inspired machine has just been released, and show's the car from sketch, to production, to test driving.

When viewed from the front at a standstill the car/cycle looks cool and futuristic.  But seen from the side, and in motion, it looks like an odd combination of a stubby-nosed sports car mated with a segway.  In profile, it does not actually look like a fighter jet, as implied, but rather like an early space shuttle mockup.  Although it accomplishes cool things, the space shuttle is commonly referred to as a "flying brick" because it is both heavy and lacking in supreme aerodynamics.

If we're being too harsh on its looks, let us know in the comments section.

Anyway, the vehicle does have a killer amount of power, considering its light 440 kg weight.  It uses a 750 cc Honda V4 engine that produces 100 horsepower, and is controlled with a sequential six-speed gearbox.  The prototype is fitted with a double rocker arm at the front, roller rocker arm at the back, and an adjustable shock system.  Disk brakes are used, but we wouldn't mind seeing heavy duty calipers and disks on the machine.

Unfortunately, Marotti will continue to push the car's appearance.  That may not be such a good idea, as the car/cycle is clearly designed to appeal to the few, not the many.

The Marotti concept was shown off earlier this year in Poland at the Poznan Automotive Meetings Design Forum.