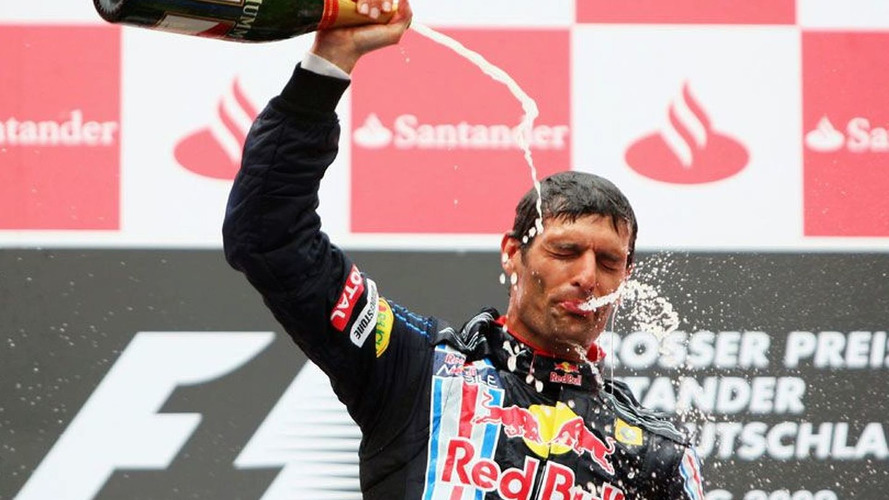 Even after having to serve a drive-through penalty, he has become the first in 28 years to win a formula one race for his home country.

Even after having to serve a drive-through penalty, Mark Webber dominated the German grand prix, becoming the first Australian in 28 years to win a formula one race.

The Red Bull driver was penalised during the race by stewards for bumping from pole position into Rubens Barrichello, who led the race early, on the run to the first corner.

It meant he visited the pitlane more than any of his rivals at the Nurburgring but still won by nearly ten seconds from his teammate Sebastian Vettel, closing his points gap to the local German to just 1.5 points.

"Mark was unbeatable," said Vettel, who nonetheless moved past Rubens Barrichello in the drivers' championship and now trails leader Jenson Button by 21 points.

An emotional Webber, just one of three grand prix-winning Australians including Alan Jones and Sir Jack Brabham, said: "I wanted to win so badly."

The 32-year-old, who had pins removed from his healing right leg last week, nervously batted off his collision with Barrichello at the start but admitted the overly-aggressive move is "not normally my style".

Felipe Massa and Nico Rosberg finished third and fourth, following a difficult race for the Brawns, whose Button finished just fifth ahead of Rubens Barrichello.

He furiously slammed his Brackley based employer after getting out of the car, moving Eddie Jordan to describe the outburst as a "grave mistake" while Sir Frank Williams told the BBC it was a "red card offence".

Adrian Sutil and Force India's rare hopes of points were dashed with a collision with Kimi Raikkonen, and Lewis Hamilton's chance of a podium vanished at the start, when following a KERS-assisted charge he sustained a puncture.

Running last, the McLaren driver pleaded with the pits to "save this engine and gearbox" with a voluntary retirement, but was told to "concentrate on the driving and leave the strategy to us".

Sebastien Bourdais retired from what was probably his last grand prix after 19 laps.