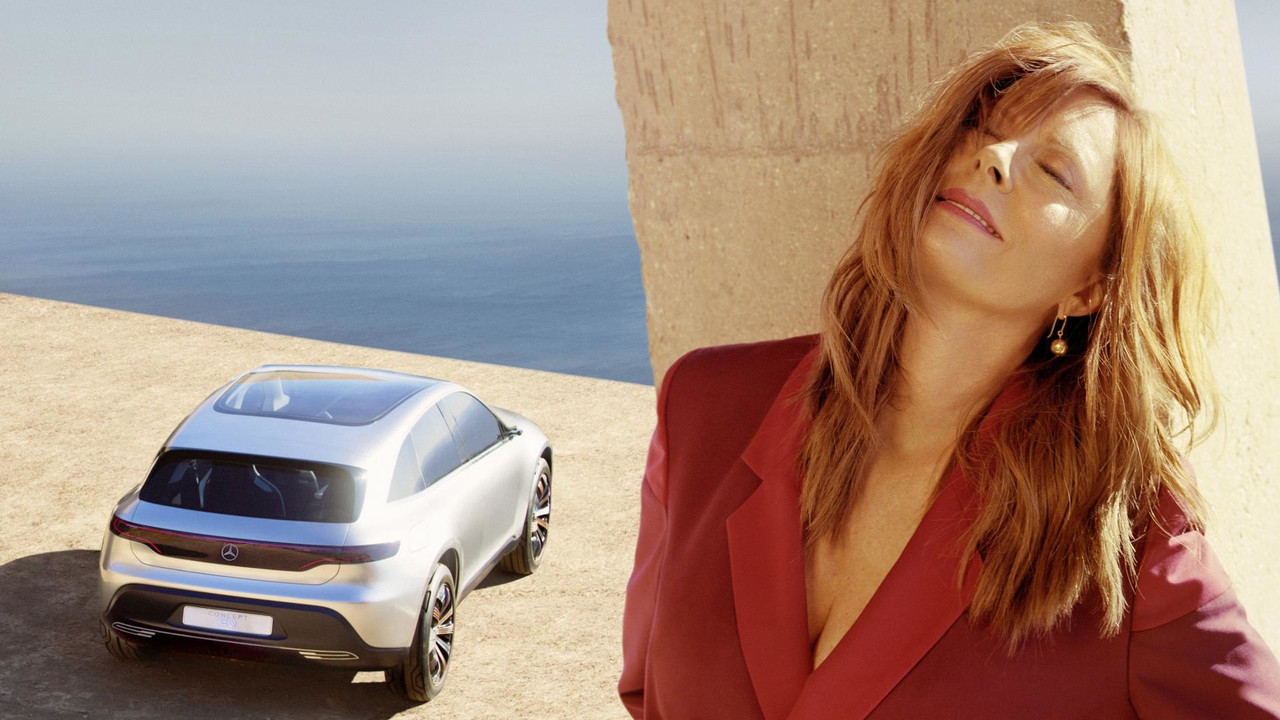 Hard to believe, but she's almost 71.

Mercedes’ latest involvement in the glamorous world of fashion is about one of its most important concepts in years, the EQ. A promotional campaign called “Generation Now, Generation Next” puts the spotlight on the all-electric crossover and the latest marketing efforts include talented actress Susan Sarandon. The Oscar-winning star from famous movies like Thelma & Louise (1994) and Dead Man Walking (1995) has agreed to pose with the futuristic concept signaling the automaker’s EV agenda.

An UNICEF Goodwill Ambassador, Susan Sarandon joined forces with Mercedes for a photo shoot conducted by Californian photographer, writer and film maker Luke Gilford. The second part of the company’s Fashion Story follows the first episode featuring British singer M.I.A. and concentrates on relationships as well as her mentorship of filmmaker Bryn Mooser.

Speaking about her tie-up with Mercedes, Susan Sarandon said:

“I feel privileged to be taking part in the latest Mercedes-Benz Fashion Story as an ambassador for humanitarianism. I am proud be presenting the Concept EQ vehicle as part of the collaboration with Mercedes-Benz, because it is very important to me to promote sustainability.”

The Concept EQ was introduced last year at the Paris Motor Show to act as a preview for a pure electric crossover scheduled to arrive in the years to come. Featuring what Mercedes calls “electro-aesthetic” styling, the concept looks like a GLC from the next decade. The all-wheel-drive showcar was envisioned with a pair of electric motors delivering a combined 402 horsepower (300 kilowatts) and 516 pound-feet (700 Newton-meters) for a 0-62 mph (0-100 kph) run in less than five seconds. Its battery pack mounted within the floor had enough juice for a maximum range of 310 miles (500 kilometers).

Another EQ-badged concept will reportedly debut at the Frankfurt Motor Show in September and is going to take the shape of an electric hatchback to signal Mercedes intentions of coming out with a BMW i3 competitor.

Chapter One of the Mercedes-Benz Fashion Story featured British musician, curator and artist M.I.A. (Generation Now) and her protégée Canadian rapper Tommy Genesis (Generation Next). Along with Luke Gilford, the two are among the first members of #mbcollective, an alliance of creative individuals who embody the values of the Mercedes-Benz brand. "Generation Now, Generation Next" is a platform that offers today's style-defining and influential personalities the opportunity to help promote tomorrow's trendsetters.

At the centre of the "Generation Now, Generation Next" campaign is the new, battery-electric Concept EQ with its "electro-aesthetic" styling. EQ signifies Electric Intelligence and is the leitmotif of the Fashion Story, which focuses on emotional relationships. While Chapter One dealt with the start of a relationship, Chapter Two focuses on Susan Sarandon, her mentorship of Bryn Mooser and the connection between the two of them. The strength and energy generated by their relationship are emphasised by powerful red tones and expressive poses.

Susan Sarandon is celebrated not only as an actor but also as a social and political activist. In 1999 she was appointed UNICEF Goodwill Ambassador and in 2006 she received the Action Against Hunger Humanitarian Award. She can currently be seen in the new TV series "Feud" on cable channel FX. In 2018 she is set to appear on the big screen in "The Death and Life of John F. Donovan". Sarandon's inspirational approach to life has the common good at its heart. This chimes well with Mercedes-Benz's goal of placing customer benefit at the forefront of its products and services. Sarandon got to know Bryn Mooser in 2010 after the devastating earthquake in Haiti and has been supporting his work ever since.

Susan Sarandon: "I'm so delighted to be part of the #mbcollective along with Bryn Mooser. Ever since I had the honour of appearing in one of Bryn's extraordinary films, I've been observing his empathy and passion. I feel privileged to be taking part in the latest Mercedes-Benz Fashion Story as an ambassador for humanitarianism. I am proud be presenting the Concept EQ vehicle as part of the collaboration with Mercedes-Benz, because it is very important to me to promote sustainability."

Bryn Mooser is known for co-founding RYOT, a media company that specialises in virtual reality documentaries for news stories and reports dealing with humanitarian issues. RYOT was nominated for the Academy Award for Best Documentary Short this year for the film "Body Team 12". The 13‑minute film revolves around Red Cross workers, providing assistance during the height of the Ebola outbreak in Liberia. RYOT is currently producing a documentary about the persecution of the Yazidi community by Islamic State (IS). The international human rights lawyer Amal Clooney appears in the film. Sarandon feels that Mooser, with his 360° approach, represents a new generation of documentary film makers and activists. The collaboration with Susan Sarandon led to a close connection between the two.

Bryn Mooser: "Susan and I have already worked on humanitarian projects all over the world, from the Middle East to the Standing Rock protests in the USA. She is unrelenting when it comes to fighting for what is right. She confronts adversity and always says what she thinks, even if it is unpopular. It's an unbelievable opportunity to be given a platform like this by Mercedes-Benz to raise the profile of our humanitarian work and benefit from Susan's experience."

The Fashion Story was shot by Luke Gilford, who chose the Wright Ranch in Malibu as the location. The organic architecture and extensive use of recycled materials underline the Wright family’s passion for sustainable living. As the leading light of a new generation of film makers exploring the possibilities of increasing digitisation, Gilford is fascinated by the polarities of Californian culture. He has already worked with Prada, Proenza Schouler and Maison Martin Margiela. For Gilford "Generation Now, Generation Next" Chapter Two is about the meeting of passions: "For this part of the Fashion Story I wanted to concentrate on the visual power of the colour red, a symbol of the passion with which Susan and Bryn pursue their humanitarian work. Emotional connections are at the centre of the good we can do in the world."

The new fashion campaign from Mercedes-Benz

As part of Mercedes-Benz's commitment to supporting and promoting emerging talents, the Fashion Story features fashion by designers such as Anna October, Xiao Li, William Fan, Ran Fan and Steven Tai. All of the participating designers have received support from Mercedes-Benz in the past and have benefited from the brand's fashion activities and the global opportunities these opened up. As part of the #mbcollective, the fashion designers are now helping to develop these opportunities still further.

In 2017 Mercedes-Benz departed from the traditional format of two seasonal campaigns and adopted a new, seasonless, direct line of communication with its global audience. Mercedes-Benz will continue to develop innovative ideas. The Stuttgart-based car manufacturer will concentrate on creating interesting social media content.

Michael Bock, Head of Sport & Lifestyle Marketing at Mercedes-Benz Cars: "The new #mbcollective Fashion Story is a collaborative storytelling format that highlights the values of our brand – values based on innovation, human benefit, interconnectedness, sustainability, emotion and intelligence – through the eyes of fashion. It supports Mercedes-Benz's worldwide fashion activities, but also allows us to continue to support emerging design talents. Our new #mbcollective allows us to communicate with impact and with lasting effect. It helps make us an even more influential and respected voice in the constantly changing fashion scene."

Over the past 22 years, Mercedes-Benz has established itself globally as a partner of select fashion events. The brand is currently involved in more than 60 fashion platforms all over the world, including the Mercedes-Benz Fashion Weeks in Beijing, Berlin, Istanbul and Milan, as well as the acclaimed International Festival of Fashion and Photography in Hyères. Mercedes-Benz continues to support select international fashion events and, over the past two decades, has made a name for itself in particular for promoting gifted young designers.