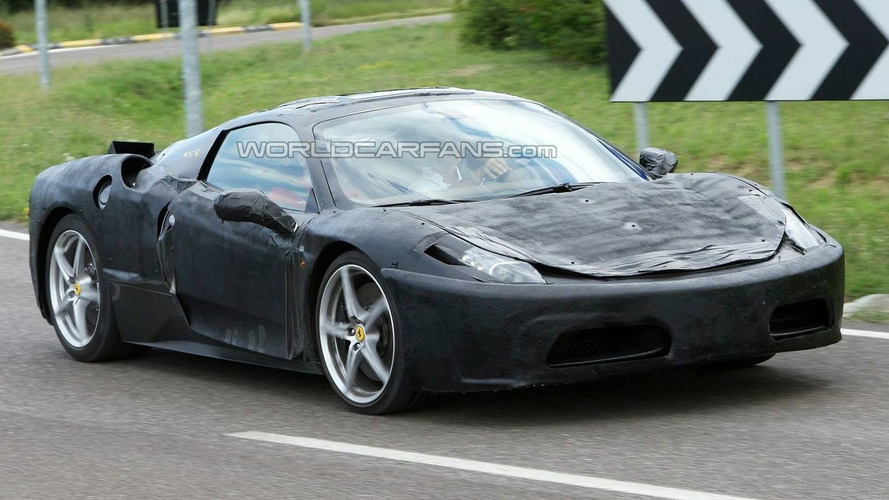 For the second time in a week, spies captured pictures of the Ferrari F450 during testing in Italy.

A full-body prototype of the Ferrari 450 was spied off the track during testing in Maranello, Italy.  The company's next top model was spotted for the second time in a week following its first appearance, althought this time it is much harder to see the apparent LED light strip off the headlamps.

This car will be the successor to the Ferrari 450.  Back in May, Ferrari officially announced the completed production of the last F430.  That unit was especially built to raise funds for those affected by April's devastating earthquake in L'Aquila, Italy.

The F430 was more or less a freshening-up of the Ferrari 360, something which has led to a large amount of interest in the F450.  The new unit has the same, steeply angled roof as its predecessor, and appears to also have some similarities at the front.

Previous spies have suggested that the car's V8 engine was relatively quiet at low-revs, but tapping the gas made the 500hp engine roar.

Unfortunately, this is all speculative due to the heavy amount of padding and tape used to cover up this car.  The tri-tailpipe configuration at the back looks interesting, and could be used to replace the F430's quad-tailpipes.  However, the exhaust on the prototype might be more of a placeholder than the final version.  LEDs appear to be a part of the taillights as well.

Ferrari could introduce the F450 at the 2009 Los Angeles Auto Show.