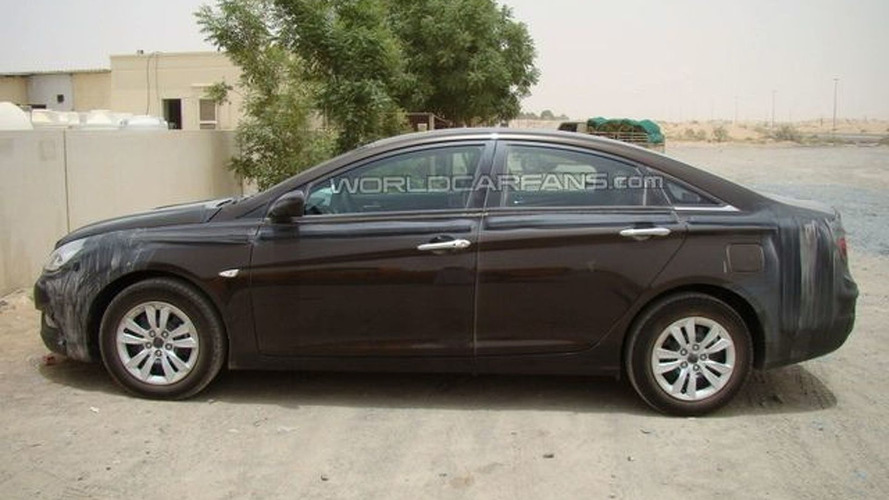 A WCF reader provided these pictures of a disguised 2011 Hyundai Sonata. It shares its styling DNA with the Genesis and will be offered with a couple of new engines. Korean sales begin in October 2010.

Hyundai is on the up and with new products coming through the company is poised to take advantage of its growth. These new spy pictures show the next-generation Sonata going through vigorous summer testing in Dubai. The Middle Eastern emirate is currently in the hot season and temperatures can easily reach 45 degrees celcius. It was only a few months ago when it was caught testing on a frozen Swedish lake.

The Sonata has definitely grown in both stature and actual size. Looking a bit curvier than the current car, it has some exterior features that are akin to the Genesis. The Genesis is the styling canvass of all new and upcoming Hyundai passenger cars.

Powertrains expected to grace the body include a 2.0-litre four-cylinder petrol and a 3.3-litre V6. The big TAU V8 may not however make it into the Sonata. Turbo diesels will be offered in Europe, perhaps even the new 2.2-litre R-Type motor making 145kW (197hp) and torque of 435Nm. The new hybrid is also a possibility.

South Korea is to get its first taste of the new Sonata when it is unveiled in May 2010, while sales begin in October the same year.