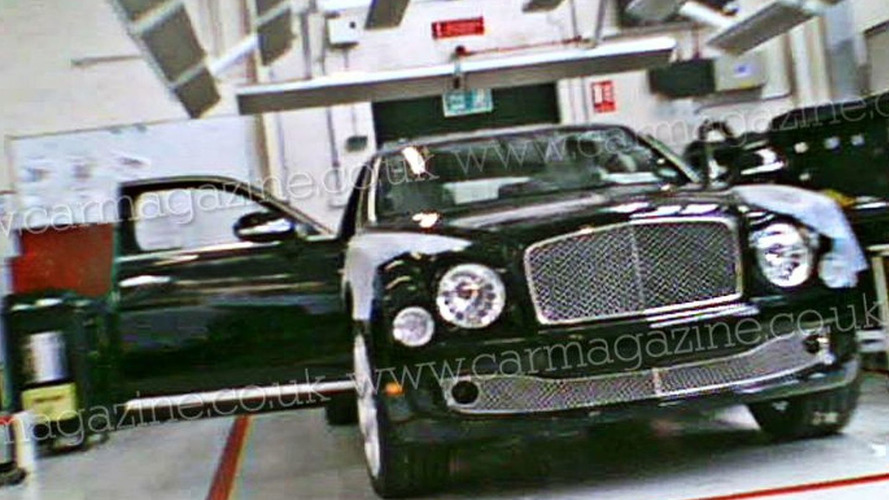 Leaked photos and details of the follow-up to the Bentley Arnage have surfaced. Possibly dubbed the "Grand Bentley," the car will not be released as a stretch limo model.

Bentley's follow-up to the Arnage may be called the Grand Bentley, and it will likely be offered in only one wheelbase, with no stretch available for order.  CAR Magazine is reporting that by cutting out the stretch wheelbase, Bentley will be able to produce more vehicles at a reduced cost.  Although the limo is not scheduled to be revealed until later this summer, someone with access to Bentley's Crewe, UK, headquarters snapped a few shots of the vehicle, and leaked them to CAR Magazine.  Full information, and the grainy, mobile phone camera images, popped up on the magazine's website over the last few days.

The car, codenamed Project Kimberley, keeps a very distinct, Bentley look at the bold front-end, and should have the new generation of the often used 6.75-liter V8 flagship engine.  This new model should produce upwards of 550 horsepower, and a maximum 800 ft-lb of torque.  An Audi four-wheel drive unit could also be installed, as it is on the Continental.  There is some speculation of both diesel and hybrid variants eventually getting the greenlight, while a biofuel model may be immediately available.  Top speed could be about 200 mph.

Similar to the Continental, the car keeps a fairly squared grille with the continued use of round headlights.  Unlike the Continental, the new vehicle's lamps are offset from each other, with each light circled by LEDs.  The grille is designed in a lighter color, and there also appears to be space for fog lamps in the mesh that sits under the front bumper.

As CAR points out, we can not see the car's mascot in these photos, despite previously-released teaser images clearly showing the statue.  The magazine says that "the rear door handles will be hidden and the bootline arcs downwards with a decidedly retro flourish."

Look for the latest Bentley to have a starting pricetag of around £220,000 for the base model.  Bentley was expected to release the car at the 2009 Pebble Beach Concours d'Elegance in August, with domestic sales beginning soon after.