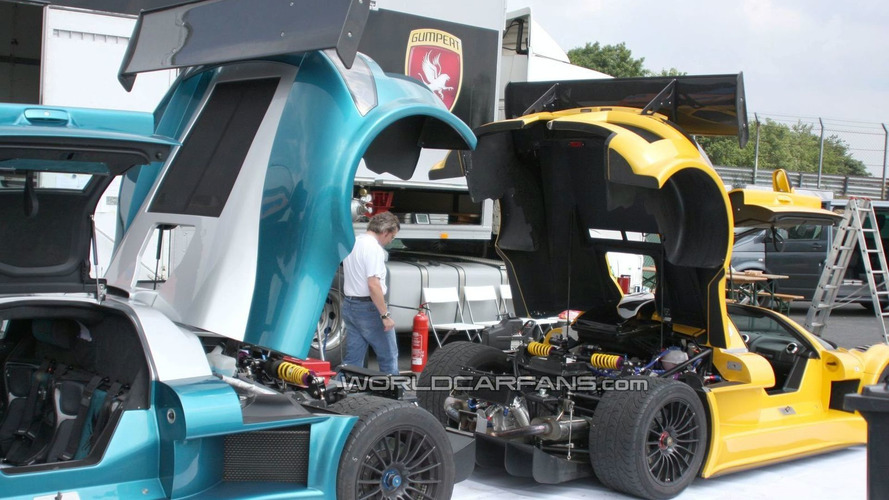 Spied on the Ring are these pictures of a Gumpert Apollo Sport prototype, featuring a few modifications. Will it make its way to Frankfurt? Geneva?

Some new spy photos captured what looks like a Gumpert Apollo Speed test mule using the body of the Apollo Sport.  We do see some changes to the body, but not enough to make us believe this is a revised Sport.

Gumpert was founded in 2004 by Roland Gumpert, a proponent of street-legal, track-ready cars.  After returning to Germany from China, where he had worked as an executive for Volkswagen, he recruited two universities and a small staff to build the first Apollo prototype.  Known for their abilitity to quickly develop their vehicles, the Apollo made its race debut at the 2005 Divinol Cup, where it took third.  Since, they have released other versions for public sale, including the Gumpert Apollo Race, Gumpert Apollo Speed, and Gumpert Apollo Sport.  A hybrid model was also built for the 2008 24 Hours Nurburgring.

First shown in production form at the 2007 Geneva Motor Show, the Apollo Sport goes 0-100 km/h in about three seconds.  This stellar performance is mainly due to the combination of an 800 horsepower bi-turbo V8 engine, impressive aerodynamic body work, and a total weight of just 1200 kg.  Top speed is listed at 360 km/h on the car.

Not to be shown up by its brother, the Apollo Speed also crushes the 0-100 km/h time with a 3.0 second time, arriving at 200 km/h in under nine seconds.  It was introduced at the 2009 Geneva Motor Show with a more aggressive look, due in part to its shortened height of 1.1 meters.  The car has visual modifications, and an underbody built from a composite of carbon and aluminum.

These photos show a vehicle with a new roof air intake.  Split side paneling is now contiguous, like on the Apollo Speed.  The giant rear wing has been available on the Apollo lineup for quite some time, but we have never seen it on the Speed.  One photo shows the prototype parked back to back with what appears to be another Apollo dressed in the same two-tone color scheme as the Speed debut vehicle, however, the tailamp cluster belongs to the Sport.

We always like to see the Gumpert Apollo setup at the Geneva Motor Show, and we're sure they will bring something interesting in 2010.  However, we want to know if they will be bringing a new introduction to Frankfurt in September.  Let us know what you think below.