Porsche 911 With Glowing Wrap Will Impress Gumballers, At Night 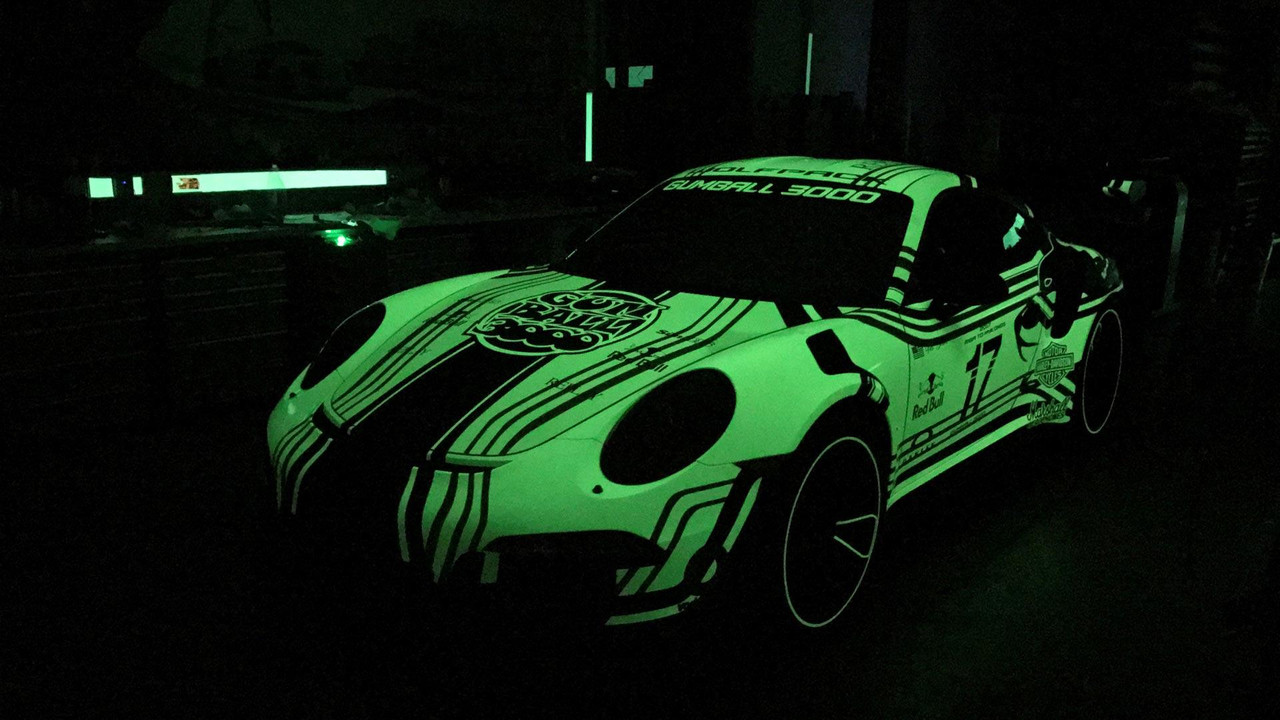 This car should draw attention 24 hours a day.

The Gumball 3000 is as much about showing off as it is about performance, and this custom Porsche 911 GT3 RS should be quite a sight during the day and at night. The performance coupe features a neon chartreuse vinyl wrap that glows in the dark in a similar shade when the sun goes down.

The wrap’s layout came from American company Garb-Design, and the application was from Austrian tuner Blackbox-Richter. They call this creation the Light Tron 911. To make the glow-in-the-dark effect work, the company started with a white Porsche and coated in in matte black. Then there was a second layer of neon-yellow-green phosphor. A third application added black-white-reflex, and then the firm gave the body more black matte with gloss overlays.

According to Blackbox-Richter, the multiple layers of vinyl required a week to apply. The firm also accented the appearance with matching powder-coated wheels. In total, the work cost several thousand euros.

The neon 911 competes as part of the three-vehicle Wolfpack team, which includes another GT3 RS and an Audi R8 V10. In addition to the wraps, the Porsches have better flowing exhausts. The Audi has a new body kit and powder-coated wheels.

This year’s Gumball 300 runs between Riga, Latvia, and Mykonos, Greece, from July 1 to 8.

Porsche currently has an update for the 911 GT3 RS under development. Spy shots reveal that the model takes the NACA-duct-covered front end from the recently revealed GT2 RS. The top naturally aspirated 911 might receive a 4.2-liter flat six instead of the current model's 4.0-liter unit. The extra displacement could push displacement to between 520 horsepower (388 kilowatts) and 550 hp (410 kW). A Weissach Package might let buyers to pay for an even lighter version of the already featherweight model. A debut of the refreshed GT3 RS is likely still a few months away because Porsche likely wants to continue riding the wave of press about the 690 hp (515 kW) GT2 RS.

Vinyl wrapping of automobiles has become almost commonplace, because of the advantages compared to a new coating. Though vinyl wrapping does not necessarily equal quality vinyl wrapping. Located in the Austrian Schardenberg, near the German border, Blackbox-Richter - operating in the field of vehicle vinyl wrapping and more - now presents a very special car wrap: the multiple vinyl wrap. For an everything but ordinary event – the 2017 Gumball-3000-Race – whose route starts in the Latvian capital Riga and leads to Mykonos in Greece, the Chief Executive Mingo RICHTER arranged spectacular vinyl wraps for three vehicles of the team “Wolfpack” - namely two Porsche 991 GT3 RS and a brand new Audi R8 V10.

Let's have a closer look at the vinyl wrap of one of the Porsche vehicles – fondly called “Light Tron 911”. First of all, the original white vehicle got a coating in black matte, followed by a second layer in neon-yellow-green phosphor.

Finally, a third coat with black-white-reflex, as well as black matte and glossy overlays have been applied.

“Garb-Design” in the USA provided the layout which resulted in a true masterpiece by Blackbox-Richter. The vinyl wrap took a week and the fees amount to – including the powder coated rims – several thousand of Euros.

“Opening up” the exhaust systems of both Porsche vehicles have been the only additional conversion. The R8, in turn, was mounted with a front- and rear-spoiler, as well as side flaps at the front bumper and at the sill - made of carbon -, as well as white powder coated rims by P3 in Klagenfurt (Austria). It is almost sacrilegious to attend to this risky driving event – which in some visited countries is declared illegal – with these splendid showpieces.