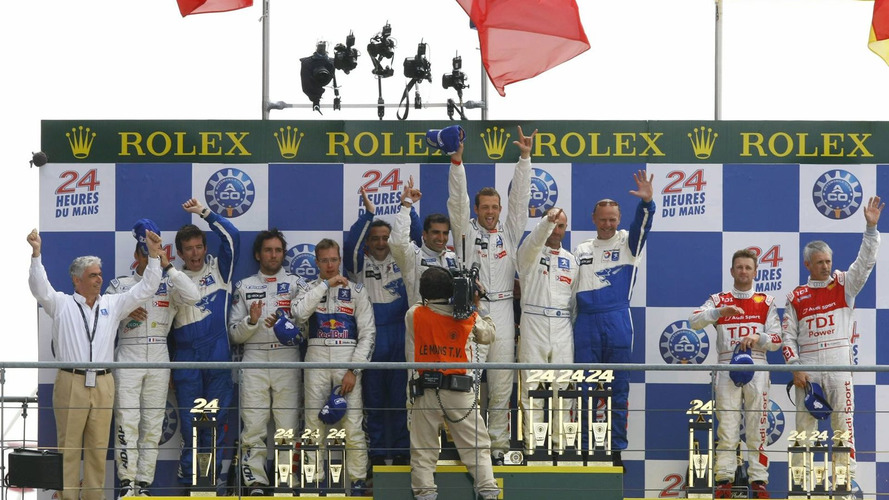 Last weekend’s 24 hours of Le Mans turned out to be a bit of a shocker, as Peugeot ended Audi’s long domination of the race.

Last weekend's 24 hours of Le Mans turned out to be a bit of a shocker, as Peugeot ended Audi's long domination of the race. The Peugeot 908 prototypes scored a 1-2 victory, while Audi's new R15 TDI racer only managed to come in third.

The winning #9 Peugeot was driven by Marc Gene, David Brabham, and Alexander Wurz while Peugeot's #8 car - driven by Sébastien Bourdais, Franck Montagny and Stéphane Sarrazin - finished one lap behind.

Audi's #1 car was one lap behind for a majority of the race, despite the best efforts of Allan McNish, Rinaldo Capello and Tom Kristensen. At the end, the Audi finished third, six laps behind the winning Peugeot and only one lap ahead of the #007 Lola Aston Martin. Audi's two other cars were knocked out of the race as one slammed into a barrier while the other experienced a faulty high-pressure injection pump.

Although disappointed in finishing third, Audi's Chairman of the Board of Management, Rupert Stadler said, "If you win the 24 Hours of Le Mans five times in succession and eight times overall this doesn't happen by chance." He added that "We know how difficult it is to win Le Mans. Also Peugeot, who we congratulate on this well deserved victory, needed three attempts."

According to Audi, the cancellation of the traditional test day meant they didn't have enough time to properly tune the R15 TDIs. This potentially resulted in the excessive understeer which was experienced by all Audi drivers on the first day. Although it was later corrected by fitting a different front body piece, the damage was already done. Audi also stated that the sidepod-mounted intercoolers would become clogged which resulted in reduced engine power and the need to clean them repeatedly.

Audi's Head of Audi Motorsport, Dr Wolfgang Ullrich, said that "There is absolutely no doubt that race did not run as we had imagined. We have once again seen why the 24 Hours of Le Mans is justifiably regarded as the world's toughest car race and why absolutely everything must be correct if you want to win. This was definitely not the case with us this time. We had unexpected problems with our new R15 TDI, which we will now analyze in peace and must solve. However, especially in the second half of the race we saw just how much potential the car has. We will build on this before making a new attempt next year."