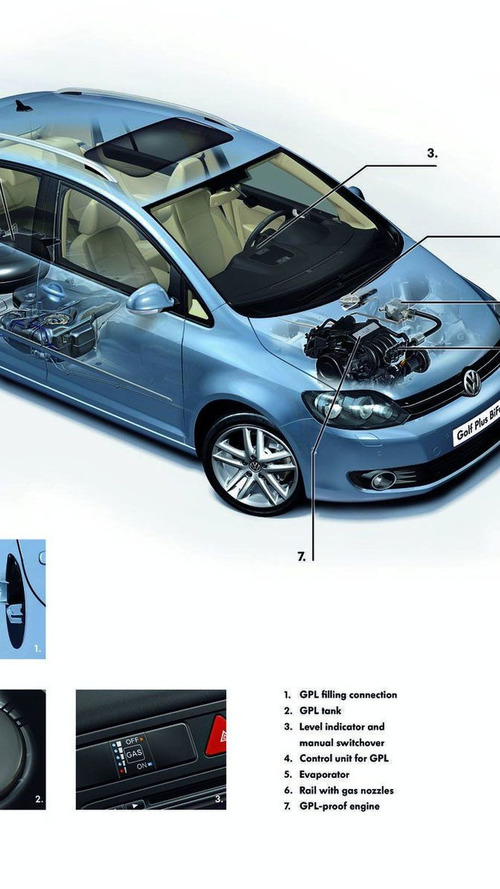 The new Volkswagen Golf Plus BiFuel is now available on the market. When using both fuel tanks, the car can travel over 1,000 km without stopping.

The Volkswagen Golf BiFuel mkVI hatchback was first debuted at Bologna in December and now available for order.  Now VW adds the VW Golf Plus variant to it's LPG lineup. The car runs on both liquified petroleum gas and conventional petrol.  Both Golf hatchback and Golf Plus are the first vehicles with a factory-installed LPG system put on the market by VW.

When running on LPG the Golf Plus cuts down on emissions by 10 percent.  Using a 97 horsepower 1.6-liter four-banger the car burns either 7.5 liters of petrol per 100 km, or 9.8 litres of LPG over the same distance.

Although the car burns a higher quantity of LPG than petrol, using LPG can translate to a savings of over €6.10 for every 100km using the current price of fuel in Germany.  Germany charges a lower amount of tax on LPG versus petrol.

Believe it or not, LPG is available in over 4,700 filling stations in Germany alone, with the fuel available across Europe as well.  Thanks to the two different fuel tanks, the car has a potential range of over 1,100 km.

The new Volkswagen Golf Plus BiFuel has a starting price of €22,460.