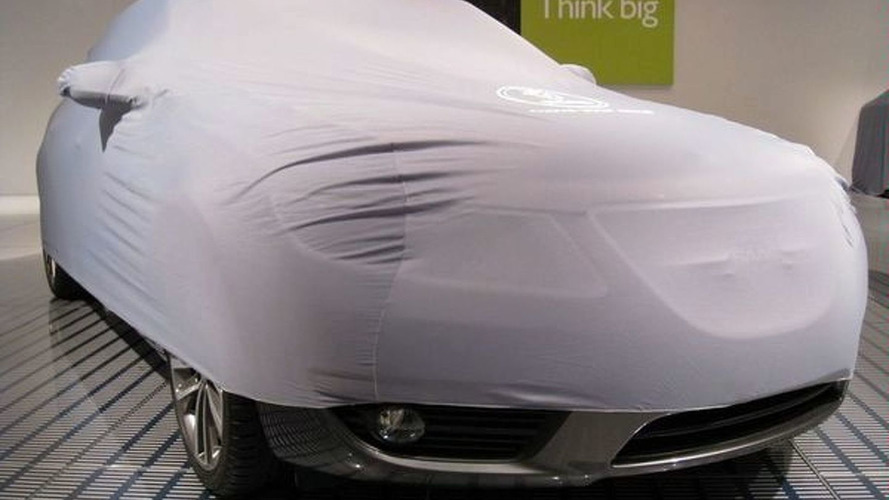 More of the upcoming 2010 SAAB 9-5 has been snapped covered on a showroom floor. The 9-5 officially makes its public debut at the 2009 Frankfurt Motor Show and sales begin in early 2010.

New images of a covered 2010 SAAB 9-5 wagon are the closest we have come so far to uncovering the exact looks and exterior dimensions of the car. Taken at SAAB's "showroom of the future", the pictures show the car's front grille with the SAAB text at the front and centre. It is flanked by something that seems to be a set of plane-inspired wings.

SAAB's typical deep-grilled face appears to have been kept in place while the headlights are more sweeping in their appearance. Chrome is a part of the look.

Moving to the rear a flowing C-pillar similar to the one on the current car is seen. Other details appearing in silhouette are a cross-piece of trim that seems to be in chrome and another piece located on the lower side of the bumper. The former would be consistent with a spy image of a white SAAB 9-5 that was taken a few weeks ago.

The new 9-5 will make its public debut at the Frankfurt Motor Show this September. It will have a number of engines fitted into it, including a 2.8-litre turbocharged V6 worth over 220kW (299hp).

SAAB still has not found a buyer yet after parent General Motors put it up for sale. No other car seems to be on their plate at the moment so the 9-5 looks to be carrying the mantle for now.