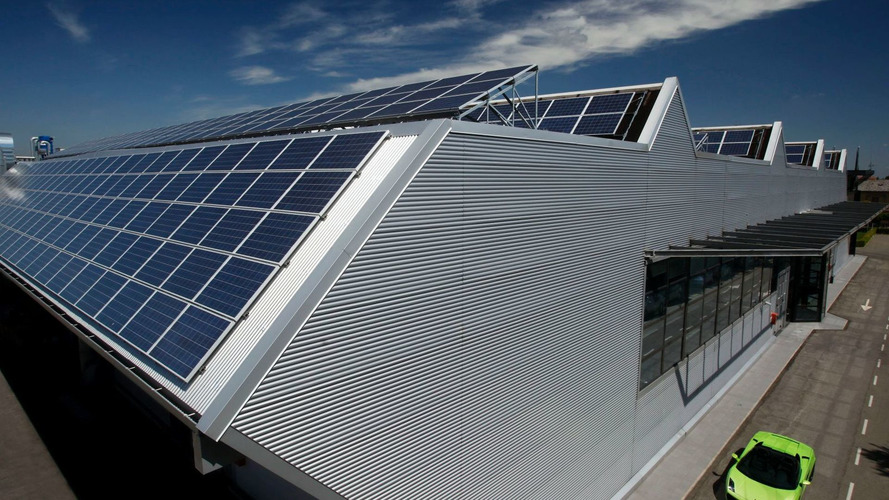 Hybrid system part of plan to reduce vehicle CO2 emissions by 35 percent by 2015. Lamborghini will also reduce emissions on production by 30 percent by next year. Employing solar panels at its facility as seen in the photo.

When Lamborghini unveiled the Estoque Concept car last fall, it suggested, without providing any details, that a V8 hybrid version of the 4-door supercar was under consideration. Now, the exclusive Italian automaker has announced it will be developing a hybrid system for future models. Yet, still, the announcement comes with few details.

Lamborghini will also be conduction research into a hybrid system as part of a 35 million euro investment in that plan to reduce emissions in its vehicles. It cites last year's Gallardo LP 560-4 as a case in point, where non-hybrid technology was employed to deliver a 18 percent reduction in that model's CO2 emissions.

But a hybrid system will only be part of that plan to reduce vehicle emissions by 35 percent. Lamborghini will also be working on improved engine management and combustion, reducing friction and weight, employment of stop-start technology and even the introduction of bio-fuel-ready vehicles.

"Lamborghini is committed to its policy of environmental management," says the brand's President and CEO Stephan Winkelmann in the press release. "We have an objective to reduce CO2 emissions to the greatest possible degree."