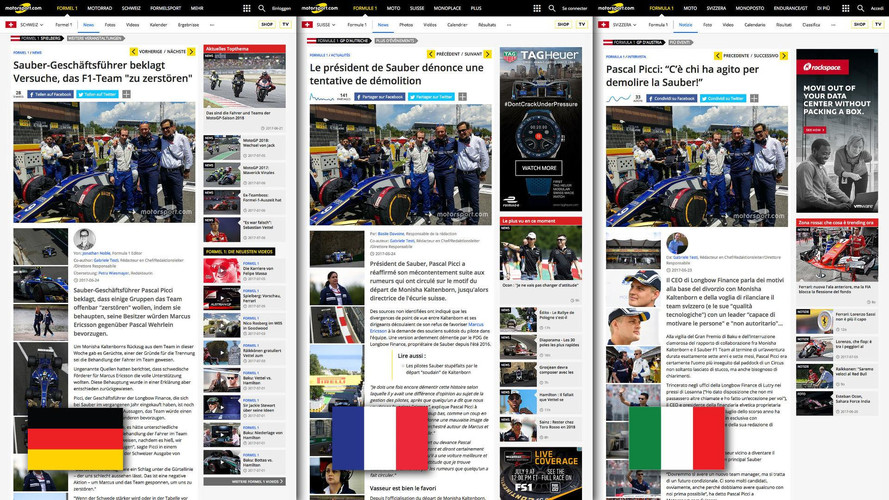 July 7, 2017, Miami, FL – Motorsport.com has launched its most innovative international edition yet with a dedicated Swiss version available in three languages – German, French and Italian.

Swiss drivers are at the top of their game on the world’s motorsport stage with Neel Jani and Sébastien Buemi holding titles as the reigning FIA World Endurance Championship and FIA Formula E champions respectively.

Stefano Comini has also dominated the TCR International Series, winning both the 2015 and ‘16 titles. Swiss Moto2 racer Thomas Luthi has also been starring on the world stage.

The country boasts its very own race-winning Formula 1 team, as Sauber has built and run cars from its Hinwil base since 1993. Before that, team patron Peter Sauber was a legend in sportscars – his cars winning the Le Mans 24 Hours in 1989 with Mercedes, as well as multiple World Sports Prototype titles.

To cater for fan demand for news, the Swiss edition will not only highlight the efforts of its local stars, but also make content available in the three main languages of the region.

Motorsport.com and its parent company, Motorsport Network, has experienced rapid growth in the past two years to become the world’s largest independent automotive and motorsport-related digital platform connecting hundreds of millions of people that love motorsport and cars.

“One of our goals though all of our titles at Motorsport Network is to not only provide the latest news from around the world, but to give readers local insight highlighting drivers and teams from their own region,” Motorsport Network CEO, Colin Smith said.

“From a technical perspective, our Swiss site is our most advanced yet and features news in French, German and Italian. Motorsport Network has the world’s best motorsport journalists and our goal is to ensure we deliver the latest news to millions of fans around the world, wherever they live, and whatever language they speak.”

The Swiss edition (which also incorporates the Principality of Liechtenstein) becomes the 21st separate Motorsport.com edition.

“Despite a long ban for circuit racing in Switzerland since 1955, interest in the sport at the grassroots level is on the rise through rally, slalom and hillclimb national championships,” said Lorenzo Senna, Motorsport.com Switzerland Country Leader.

“Motorsport.com continues to grow across the globe and we’re thrilled to be the first edition to offer three separate languages for our fans.”