UPDATE: The Moller M400 Skycar Is For Sale To The Highest Bidder 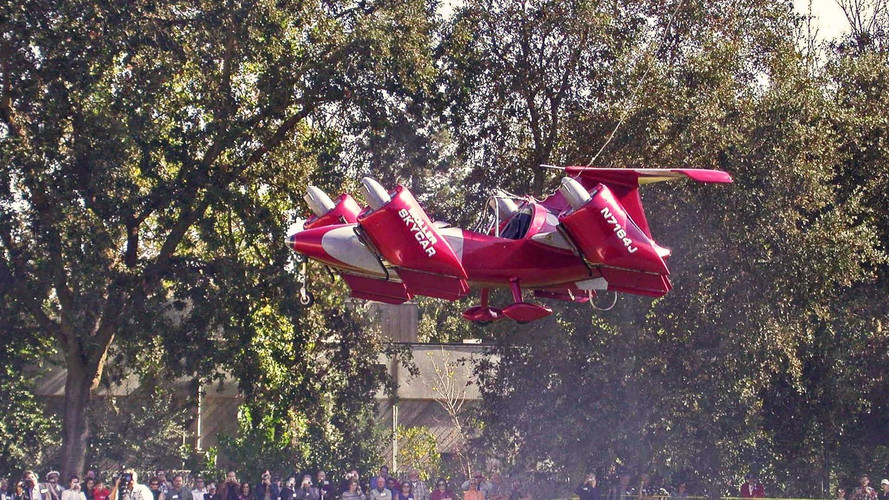 The VTOL flying car is fully functional, but you aren't allowed to fly it.

It looks like there were no takers for the Skycar at the reserve-not-met opening bid of $1 million. The flying car that can't be flown has been relisted on eBay with a much lower starting price, now just $250,000. That opening bid still doesn't meet the reserve, but given the history of both car and company, it will be interesting to see if there are any takers at this lower price point. You can follow the bidding action at this link.

Okay, it’s officially the 21st century. Didn’t that happen 17 years ago? Technically speaking, the answer is yes. But today – July 6, 2017 – is the day you can log into eBay and buy an honest-to-goodness flying car. What we have here is the 2001 Moller International G90 M400 Skycar

and yes, any eBay user can place a bid, which opens with a reserve-not-met price of a million bucks. For the rich and impatient Motor1 readers out there, you can have this flying car right now for $5 million.

Or at least, sort-of a flying car. Clearly some additional explanation is required.

The Skycar is the brainchild of Dr. Paul Moller, who’s been dabbling in the flying car world for decades. Back in the late 1990s he was drumming up investors for the aforementioned project, and obviously a prototype was built because it's now for sale. Then came a big legal mess in the early 2000s where allegations of fraud were leveled against the company. We won’t get into the attorney speak, but the negative press took its toll on both Moller and the company. The man ultimately filed for bankruptcy, and though the company continues to do business while touting new flying car developments, there hasn’t been much to talk about.

That brings us back to the M400, which is a full-on functioning machine that is capable of taking off and landing vertically. It’s powered by eight Rotapower engines that are said to produce over 720 horsepower, which per this video is enough to get the Skycar off the ground.

What’s not entirely clear is what happens once the car is airborne. Presumably the engines rotate forward and away you go, though actual speed and performance is unknown. And once the Skycar is on the ground, actual vehicle performance isn’t really known, either. The wheels appear to be run-of-the-mill aircraft landing gear, and we can’t imagine that single nose wheel being very stable though corners.

Not that any of this matters, because the Skycar isn’t certified by the FAA to fly. Furthermore, as a condition of the sale it is not to be flown by the new owner, hence why you can buy this sort-of flying car. Then again, the auction also states that “with the support of Moller International” the buyer can make this the first FAA approved flying car.

So basically we have an auction for a flying car that does fly (or at least hover), but as a condition of the sale the buyer can’t fly it unless said buyer gets it FAA approved with “support” from Moller International. We’re beginning to see why there’s some controversy surrounding this company.

With five days to go in the auction there has yet to be a single taker for the $1 million opening bid. Regardless of the controversy, we hope the Skycar goes someplace where people can appreciate it as a legitimate part of both motoring and aviation history.

Moller International is offering to sell its original M400 Skycar® via public auction as a centerpiece of any car or aircraft collection in a public or private museum. It is the world’s first true VTOL (vertical takeoff and landing) “Flying Car” to be demonstrated. It is very prevalent on Google and YouTube under M400 Skycar.

The M400 Skycar is a true museum piece, developed over many years and first flown in 2001 at the company’s shareholder meeting. It has since flown (under a restricted environment) many times. This vehicle was featured on the covers Popular Science, Popular Mechanics, and the topic of countless news articles and broadcasts including 60 Minutes, ABC, Bloomberg, CNN, and Discovery Channel.

A collector who buys the M400 Skycar® will receive it in its original 2001 flight form and condition, complete with eight Rotapower engines that produced over than 720 hp allowing the M400 Skycar® to take off and land vertically. It should be noted, however, in this original form, it was not FAA approve and a condition of this sale is that it cannot be flown. Nonetheless, this vehicle can be the centerpiece of any car or aircraft collection in a public or private museum. Reassembling it back to its original state will take some time.

Over the last 30 years, Moller International has spent more than $150 million developing the engine and airframe technology to make this prototype possible. A modified version of the original M400 Skycar® was previously offered for sale, but failed to meet the reserve. The M400 prototype has now been superseded by the hybrid Skycar® 400 configuration.