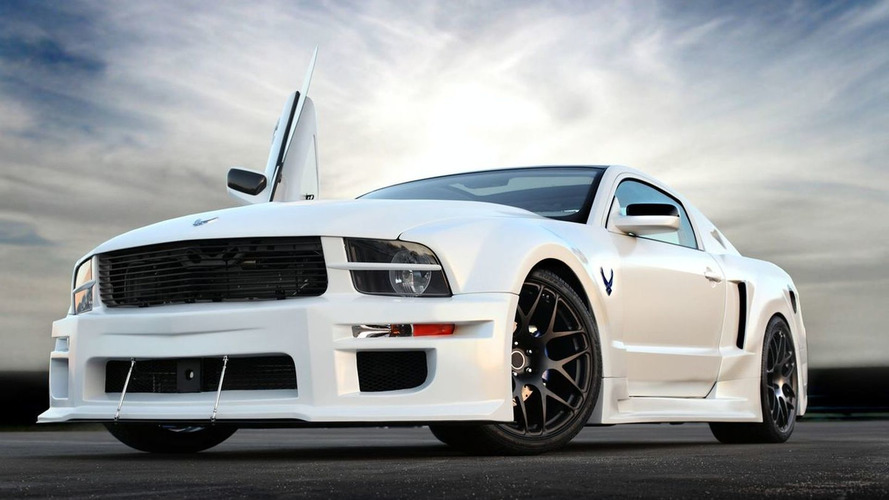 Check out these two impressive tuners built for the U.S. Air Force: Meet the Ford Mustang X-1 and the Dodge Challenger Vapor.

American tuners Galpin Auto sports have created two customs for the U.S. Air Force to wheel out on their 2009 Super Car Tour.  Both cars will be used as recruitment tools for the military outfit.

First up is the matte-pearl white Ford Mustang X-1, with an interior modeled after a fighter jet cockpit.  The muscle car seats one, but even that could be reduced: the driver sits in an ejection seat "just in case."  Pedals are on either side of the center console, with an oddly placed flight stick in the middle to replace the steering wheel.  Three "advanced instrumentation panel(s)" take up quite a bit of space, and look to cut off some of the view outside the windshield.  But who cares?  The monitors on the panels show night- and thermal-vision almost making the windshield obsolete!

Along with other mods, three-valve Ford Racing heads are used inside the 4.6 liter engine to bring the output up to 500 hp.  Vertical doors are meant to give a more "jet-like" feel.

That feeling also translates to the Dodge Challenger Vapor thanks to the "radar-absorbing" stealth-black paintjob.  The military aspects only begin with the exterior look; stealth exhaust lets the vehicle run in near silence, but the driver can open the headers to create a surprise aggressive engine noise.  The Vapor requires biometric verification to gain entry to the driver compartment.  Once inside, the driver can view the night and thermal vision as it is projected onto the windshield.

However, if the driver is unable to get to the car, he or she can still command the vehicle from a remote control system modeled after the Air Force's Unmanned Aerial Vehicles.  The remote system can be accessed worldwide through the internet.

Both cars recently were introduced in Austin, Texas by Galpin's own Mad Mike.  Mad Mike, a fixture on "Pimp My Ride," said, "If it was not for the U.S. Air Force, I would not have the knowledge and skills that enables me to stand where I am today."