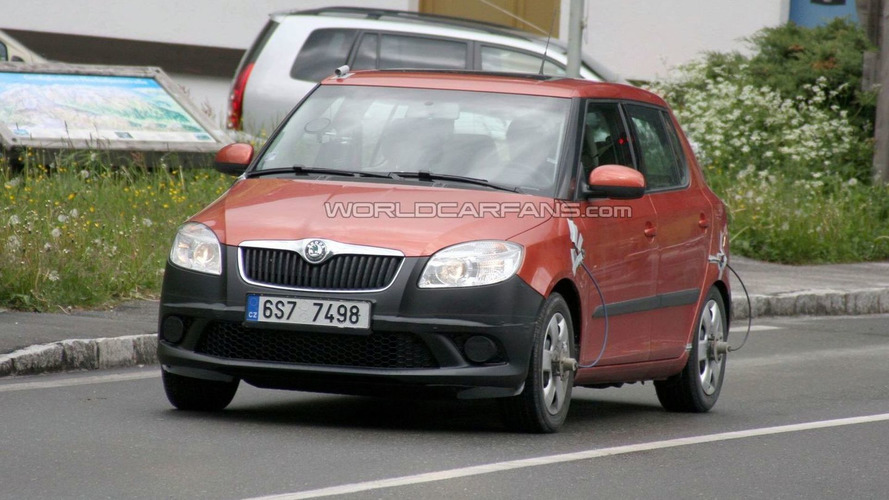 We get our first glimpse of the facelifted Skoda Fabia. The vehicle has a sportier front bumper, with potential for more customization.

Today we received the first ever spy pics of the upcoming 2010 Skoda Fabia.  The second generation of the Czech supermini will receive a facelift for that model year, roughly three years after its introduction.

Caught without camouflage in the mountains of Austria, the two-tone variant was still undergoing tests when the photogs spotted it.  Here we see the vehicle's sporty new front bumper, combining a honeycomb lower grille with built-in positioning for fog lights.

The use of multiple colors on the new Fabia was introduced as a possibility at this year's Geneva Motor Show.  The VW-owned automaker showed off a Skoda Fabia Sport Design Concept that made generous use of red and black.  At the same time, a Skoda Fabia Scout Design Study at Geneva showed a car that used a forrest green color offset with white.  The Sport concept is rumored to become the 2010 Skoda Fabia vRS, possibly hitting the market with the facelifted Fabia.

As far as the spied car goes, its headlamps have the same shape as the current model.  One camera angle does suggest that this car is riding a little low in the rear, which could be for a variety of reasons, given the testing apparatus installed on the wheels.

No doubt we will see more pics of this car before its anticipated debut in Frankfurt this September.