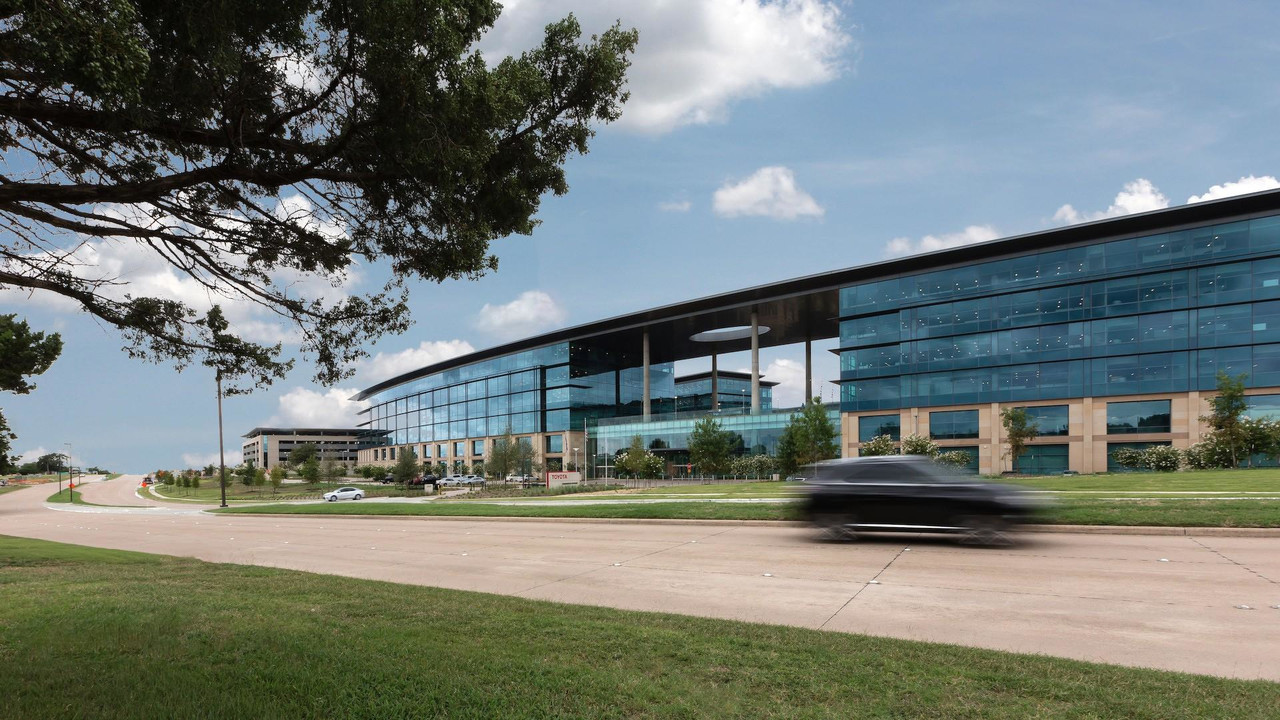 The new Plano facility cost more than $1 billion to complete.

Goodbye Cali, hello Texas. Following the announcement that Toyota would be leaving its longstanding headquarters in Torrance, California, Toyota North America today celebrated the opening of its all-new, state-of-the-art facility in Plano, Texas – and they have plenty of photos for us to gawk over.

The new facility is part of the company’s $10 billion investment into the U.S. over the next five years, and alone cost more than $1 billion to complete. More than 4,000 jobs will be housed at the headquarters, with an effort to hire more than 1,000 new team members in the next few years. Already the company has filled more than 75 percent of its open positions.

"The opening of our new headquarters in Plano is an extraordinary next step in Toyota’s 60-year journey in the United States," said Jim Lentz, CEO of Toyota in North America. "With team members from four different companies together in one campus location, we believe this will inspire greater collaboration, innovation, and faster decision making as we turn to and lead the future of mobility, all with an eye on our customers."

In its 60 years in the U.S., Toyota North America has invested a whopping $23.4 billion, including 10 manufacturing facilities around the country, nearly 1,500 Toyota and Lexus dealerships, and more than 136,000 direct and dealer employees. Apart from construction of the new facility, the aforementioned $10 billion will go towards improvements to its existing manufacturing facilities.

Already the company has kickstarted production of the new Camry in Kentucky, which will be the first vehicle in the U.S. to ride on the Toyota New Global Architecture. The Georgetown, Kentucky facility recently benefitted from more than $1 billion in equipment and personnel upgrades, adding more than 700 new employees.

Toyota Motor North America, Inc. (TMNA) is celebrating the official opening of its new North American headquarters today in Plano, Texas with a gala event to be attended by hundreds of dignitaries, partners and community leaders who will get the first glimpse of Toyota’s new corporate campus that reaffirms the company’s longstanding commitment to the United States.

“The opening of our new headquarters in Plano is an extraordinary next step in Toyota’s 60-year journey in the United States,” said Jim Lentz, CEO of Toyota in North America. “With team members from four different companies together in one campus location, we believe this will inspire greater collaboration, innovation, and faster decision making as we turn to and lead the future of mobility, all with an eye on our customers.”

Lentz added, “We appreciate the support from President Trump of our continued commitment to investing in the U.S. and sustaining American jobs.”

Congratulating Toyota on its grand opening, the company received a written statement from the White House, signed by the President.

Three years ago, Toyota announced its “One Toyota” initiative to create more unified operations in North America, in part, by bringing together its quality engineering, sales, marketing, financial services, and corporate functions in one location.

Since then, the company has invested about $1 billion on the project to build its new corporate campus on 100 acres in Plano and move thousands of team members and their families from California, Kentucky and beyond to North Texas. With construction nearly complete, occupancy began in late spring, and an average of a couple hundred team members per week are moving in, which is expected to continue in phases through December.

Celebrating its 60-year anniversary in the United States this year, Toyota has long been part of America’s cultural fabric. Toyota’s U.S. commitment includes:

In addition, earlier this year, Toyota said it will spend $10 billion in U.S. capital investments over the next five years, an outlay that includes the construction of its Plano headquarters and improvements to its existing manufacturing facilities.

The company will have jobs for up to 4,000 Toyota team members in Plano. In addition to the employees who chose to relocate, Toyota previously announced that it would hire more than 1,000 new team members from the rich mix of local talent and elsewhere. More than 90 percent of the company’s new hires from the past year for positions in Plano have come from the North Texas market. Toyota has already filled more than 75 percent of its open positions.

“The greatest resource we have here in the Lone Star State is our highly-skilled workforce that draws global businesses like Toyota to Texas every day,” said Governor Greg Abbott. “The 4,000 jobs added and Toyota’s impressive new facility are proof of the remarkable momentum of Texas’ continuing economic expansion. I am proud that Toyota is expanding here, and I thank them for their commitment to being an important part of our Texas community.”

New Corporate Campus Inspired by One Toyota Vision, with Focus on Sustainability
The new campus supports the company’s One Toyota vision with spaces that intentionally create and foster a transparent environment, encourage the fun of discovery, and make Toyota a place where people want to come to collaborate and innovate. Among the seven buildings is a large central courtyard that serves as the literal and symbolic heart of all social and business functions – including dining, fitness, and conferencing facilities.

Additionally, Toyota demonstrates its commitment to sustainability with consideration for the environment as it aims to achieve LEED Platinum certification from the U.S. Green Building Council by offering:

“Our new campus has fun, unexpected, and even playful features that reflect our commitment to be a world-class leader in innovation with state-of-the-art facilities and cutting-edge technologies,” said Doug Beebe, general manager of real estate and facilities for Toyota Motor North America. “It also is a great example of Toyota’s commitment to environmental sustainability. Because of its architecture, its central location, and the lively, flourishing community around it, we can share ideas and make great things happen here. We are proud of this campus because we have designed it to allow team members to get out of their office space and come together. And, that’s really the spirit of One Toyota.”

Professionals who led this project include a host of Dallas-based firms: KDC Real Estate Development & Investments to develop and build the campus, architect Corgan Associates to design the campus, and Austin Commercial to manage the construction. Also, commercial real estate firm JLL was the tenant representative. Construction at the campus included the pouring of more than 142,500 yards of concrete, installation of more than 12 acres of glass and enough Texas limestone to equal the weight of 340 Texas-built Toyota Tundra 1794 Edition trucks. At its peak, there were approximately 2,000 workers on site daily, putting in more than five million hours of work on the project.

Campus Opening Marked by Celebration with Local Dignitaries, Celebrities
To mark the occasion of the opening, the company is holding a special celebration for more than 300 guests. Speakers will include Jim Lentz, Plano Mayor Harry LaRosiliere, and other Toyota and other local government representatives.

“We are so pleased to finally welcome all of Toyota’s team members to Plano and celebrate the opening of this wonderful new facility,” LaRosiliere said. “Toyota has already proven to be a great corporate citizen and neighbor, and we look forward to the continued impact it will have not only on Plano, but on the whole North Texas region.”

Guests will be welcomed with a musical performance by the local Plano Symphony, performance by vertical dance group pioneers, Bandaloop; as well as a fine dining experience from noted celebrity Chef Dean Fearing. Tours of the new campus will also be provided as part of the evening’s activities.