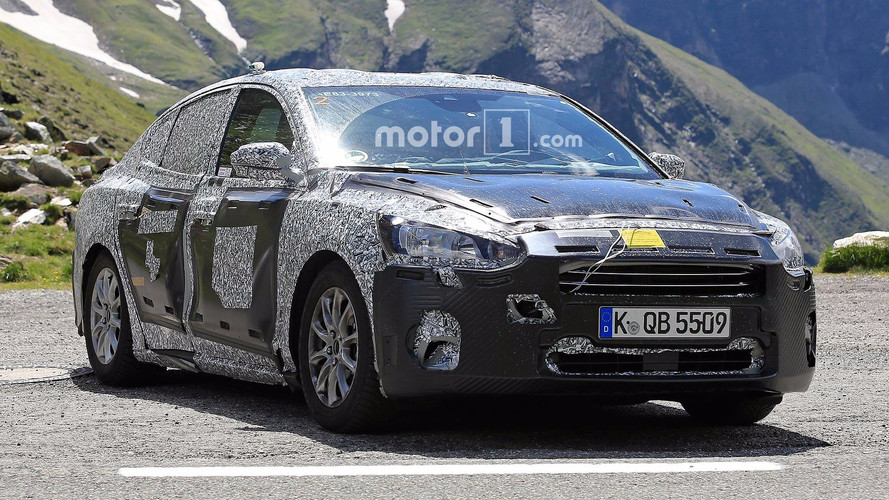 The compact four-door's design seems to take some cues from the Fusion.

Ford Focus production is about to go on hold for a year in the United States while the Blue Oval prepares to shift production from Michigan to China in 2019. When assembly for the U.S. resumes, this newly spied Focus Sedan could be a major part of the automaker’s attempt to reinvigorate interest in the compact model.

Ford keeps this Focus Sedan under heavy camouflage and body cladding. Up to the B-pillar, it looks the same as previously spied hatchback test mules, including a low-slung nose and narrow headlights. Fitting the trunk necessitates a revised roof, and its steep arc looks quite attractive. The plastic panel on the trunk hides the exact shape, but the tail appears to be sleeker than this piece make the rear seem.

These photos don’t let us see inside. However, previous spy photos of a hatchback test mule reveal a large infotainment display at the top of the center stack (below).

The next-gen Focus reportedly moves to a new platform that allows for a longer wheelbase and wider track. The cabin looks spacious in these photos, and the lengthy rear overhang should allow for decent cargo space in the trunk.

Powertrains for the future Focus are a mystery. Ford’s increase use of turbocharged mills suggests that the model might only be available with force-inducted powerplants in some markets.

While the next Focus for North America will come from China, European examples will continue to arrive from Germany. The new model will likely debut in 2018, but it will possibly go on sale in Europe first because production will still be underway there.