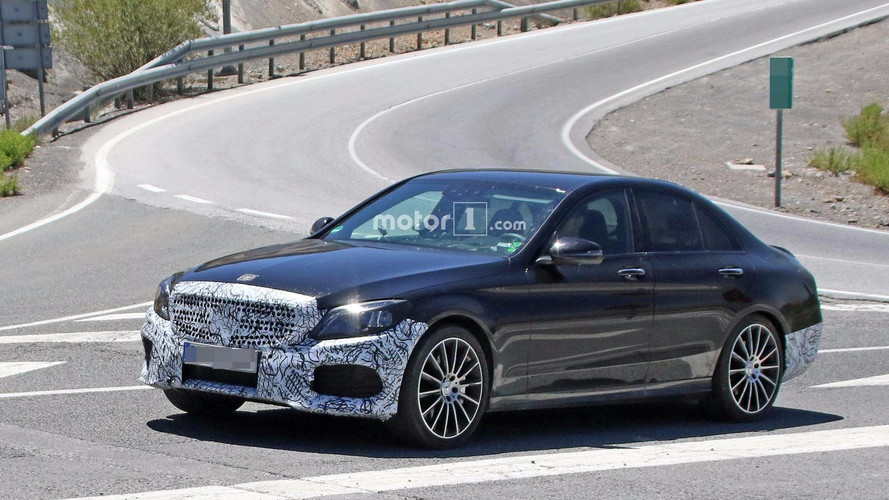 The tweaks inside are more significant than the ones on the outside.

Mercedes-Benz prepares to give the C-Class a facelift in these spy shots of the upcoming refreshed model.

For the exterior, the tweaks amount to a handsome evolution of the current model’s looks. The front fascia retains its three-section layout, but the inlets are smaller, which allows for thicker uprights between them. Mercedes’ engineers completely hide the grille here, but photos make it look a little larger than on the current vehicle.

Even base models of the refreshed C-Class will reportedly come with standard LED headlights. Mercedes will load on even more sophisticated lighting on higher trim variants.

The rest of the aesthetic changes are at the rear. Covers over the taillights indicate that the sedan has new parts, and they look somewhat more angular than the existing versions. The camouflage on the bumper hides the styling adjustments, but the diamond-shaped exhaust outlets match the parts on the current C300.

The refreshed C-Class’ biggest change is on the inside where Mercedes drops the existing rotary controller for the COMAND infotainment system in favor of a new touchpad. Earlier spy shots also reveal revisions to the instrument panel and steering wheel, too.

Under the hood, Mercedes might install its new M 264 turbocharged 2.0-liter turbocharged four-cylinder that features a 48-volt starter-alternator and 48-volt water pump. The company’s new inline-six could arrive in higher trims as a replacement for the existing V6.

September’s Frankfurt Motor Show could be Mercedes chance to debut the revised C-Class, and this could allow sales to begin before the end of the year, particularly in Europe. After the sedan’s reveal, expect Mercedes to slowly introduce similar revisions for the coupe, convertible, and estate.