ABT AS5 cabrio based on Audi A5 Cabrio 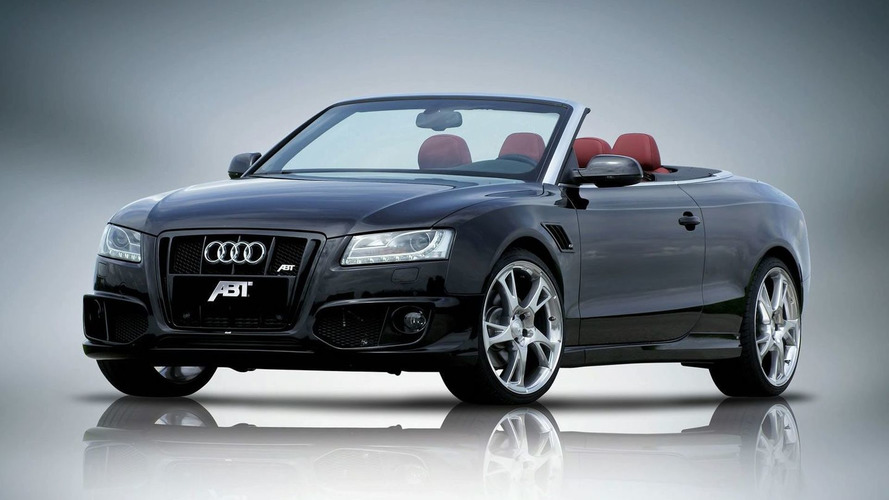 AS5 comes with power boosts on 4 different engines, including the 3.0 liter diesel, tuned to 310 hp and 610 Nm of torque.

ABT Sportline does a makeover of the Audi A5 Cabrio and calls its little reinvention the AS5.

First off, let's have a look-see under the hood.

Well, ABT POWER provides some tweaking of the electronic engine management system which is offered on four different power plants. The 2.0 TFSI gets a substantial kick upstairs to 275 hp instead of the standard-issue 180 or 211. The 2.7 TDI is taken from 190 hp to a livelier 230. The 3.0 liter TDI diesel also gets an up-tuning to 282 hp from the production version's 240.

Also available is the ABT POWER S package, which can do a little more to that 3.0 liter diesel engine to take it well past 300 horses to a power output of 310 hp and 610 Nm of dump-truck-like torque.

All models will come with the ABT or ABT Sports braking units in order to have on hand the heftier reigns to safely bring the AS5 Cabrio thoroughbred to a halt.

On the exterior we get the usual ABT grill, side skirts, new front and rear skirts with the standard ABT quad-exhaust. Both 19 and 20-inch wheels are available, in the "cool bold BR alloys" style. Also on offer are the more exclusive ABT wheel sets with high-performance tires for maximum road munching traction.

Gallery: ABT AS5 cabrio based on Audi A5 Cabrio