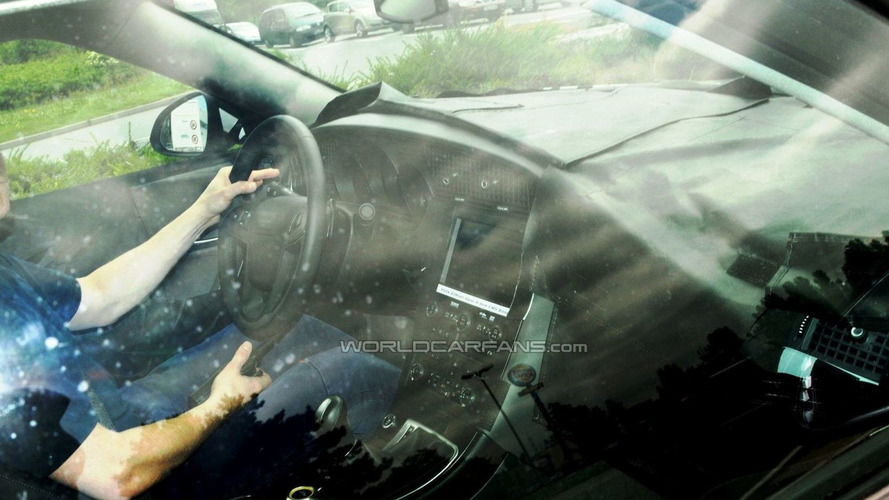 With the current Saab 9-5 being an automotive afterthought, the company needs the redesigned 2010 model to be a huge success with consumers and critics alike.

With the current Saab 9-5 being an automotive afterthought, the company needs the redesigned 2010 model to be a huge success with consumers and critics alike. Thankfully spy photographers have managed to give us a glimmer of hope as they've snapped the first images of the car's undisguised interior and rear end.

While we can't gather a complete picture of the new 9-5's overall design, the pictures show us a shapely rear end with taillights inspired by the 9-4X BioPower Concept which debuted at the 2008 North American International Auto Show in Detroit. Another picture provides a partial glimpse of the car's rear greenhouse which boasts a dynamic sweeping appearance but thanks to an unfortunately parked Opel, details are limited.

The interior also echoes the 9-4X Concept as it features Saab's trademark "7" dashboard, complex air vents, and a button intensive center stack. Judging by the looks of this prototype, the cabin seems rather somber so hopefully that will change by the time the 9-5 heads into production.

Riding on the new Epsilon II platform, the 2010 9-5 will feature a variety of engines including a host of updated four-cylinder gas and petrol units as well as a new 2.8-liter turbocharged V6 with 300 horsepower.

Look for the new 9-5 to be officially unveiled at the Frankfurt Motor Show in September with sales beginning early next year.