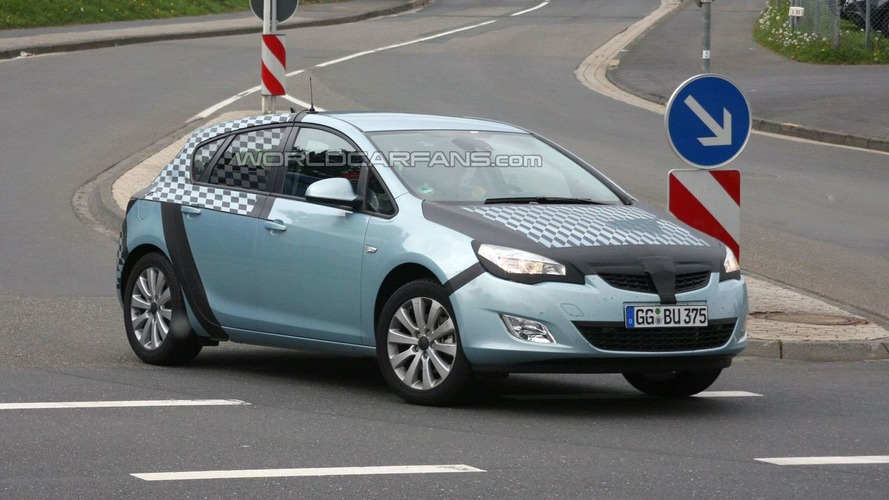 Next-generation Astra is scheduled for launch in the fall of 2010. The new Astra will first come with a normally-aspirated 1.4 liter engine, with turbo-charged versions of it following later on with varying power outputs of 120 and 140 hp.

Even after we've already had our first official look at the 2010 Astra, Opel is still sneaking the car around in disguise for its final year of testing. The Astra spotted here wandering the streets is still under quite a bit of camouflage. Perhaps the boys and girls on the development team didn't get the memo.

We've covered how the new Astra is in line with Opel's new design paradigm, epitomized by the Car of the Year winning Insignia model. The German brand (a subsidiary of GM) may still be in trouble and looking for a suitor with deep pockets to rescue it, but Opel products certainly have not relented in continuously upping their sexy quotient.

Of note, though, here is a trend in this class amongst European automakers of going with small, turbo-charged gasoline/petrol engines on these sometimes sizzling, sometimes just lukewarm, hatches. Peugeot has a 1.6 liter turbo topping the 308 range. VW has a new 1.2 liter turbo for the upcoming Polo and has had a 1.4 liter TSI for the Golf for some time now. It seems normally aspirated 2.0 liters are on their way out and 2.0 liter power plants now only come turbo-charged for top performing GTI or RS variants.

This new Astra is reflective of that trend. Engines that will likely be available on it include a 1.4 liter turbo with power outputs ranging from 120 to 140 hp. The Insignia has a 1.6 liter turbo with 180 hp it may well want to hand down to its little brother too.

The next-generation Opel Astra is slated for release in the fall of 2010.