McLaren 570S Crashes Into House, Burns To A Crisp 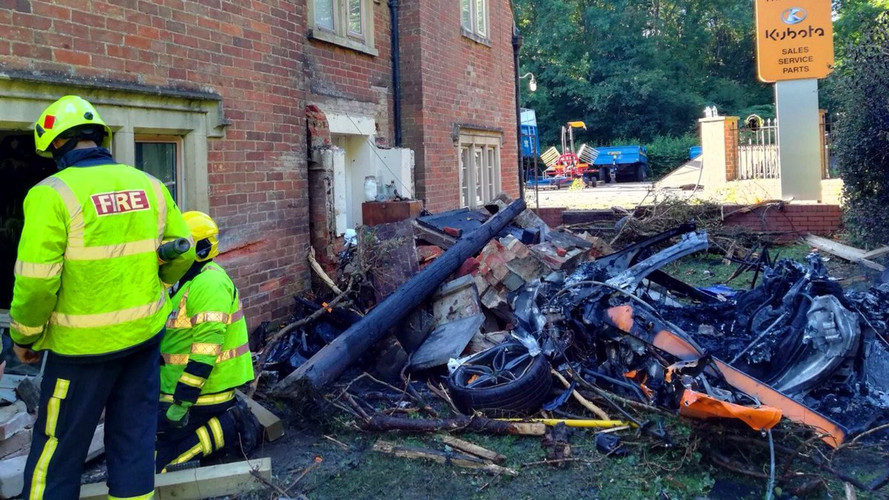 Those pesky houses are always jumping into the street.

Nobody likes to see a supercar crash. In this instance, the McLaren 570S in question not only crashes, it hits a house then goes up in flames. Fortunately, the driver and passenger escaped with minor injuries, and apparently there were no injuries at the house. Unfortunately, the supercar was a complete loss, and we mean complete.

According to Sky News, the car sailed off a country road near the English town of Trowbridge, about 110 miles west of London. The crash occurred this past Sunday morning, and while details of the accident aren’t known, we do know it struck a house hard enough to collapse portions of the brick exterior. Nor do we know the cause of the fire, but the report states that despite the damage and ensuing blaze, the house was safe and secure.

Thankfully, brick doesn’t burn because the once-orange McLaren was reduced to mangled pile of black rubble.  If it wasn’t for a single wheel visible in the photos, we’d have no idea the remains were even of a car, never mind a McLaren. Given the manufacturer's extensive use of carbon fiber and aluminum in the 570S, a hot fire doesn’t leave much behind. Considering the intensity of the blaze, we’re surprised there isn’t additional fire damage to the house or surrounding landscape.

All things considered, it certainly could’ve been much worse. If there’s anything good here, seeing such devastation while knowing the occupants walked away with minor injuries suggests the 570s can take beating while protecting its occupants. Still, we’d prefer to see crash tests performed in controlled environments where actual people and homes aren't involved.

Drive safe out there everyone.