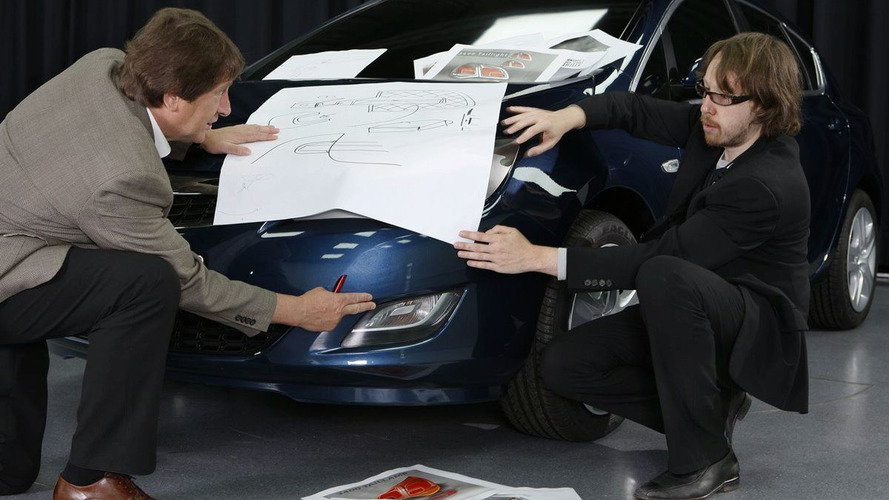 Do those papers have something significant on them about the car or are they just using them to obstruct our view?

That is the Astra's head designer Marc van der Haegen and Laszlo Kreth, the engineering coordinator on the new Astra project, doing their best strip tease display for the next-generation model.

We don't get to see much but click on the related links below for more stolen or leaked shots of the new Astra which will likely debut at the Frankfurt motor show this September.

Opel will be offering several body-style versions for the upcoming Astra, including a coupe-inspired 3-door hatch named the GTC, a 4-door sedan, a wagon, a coupe/convertible and, of course, the standard 5-door hatch.

The new Astra is based on the same architecture as the Chevy Volt but will not come as a plug-in or standard hybrid, at least, not at first. New will be a 1.4 liter, turbocharged gasoline/petrol engine with various power outputs. A downsizing first begun by VW with its own 1.4 liter turbo engine, with many automakers in Europe now offering turbocharged 1.4 or 1.6 liter powerplants instead of naturally aspirated 2.0 liter ones.

Opel will likely be reserving its 2.0 liter implant for an OPC version (or the Astra VRX for Vauxhall) to rival the Golf GTI and other hot hatches, with that engine currently available in a 240 hp turbo configuration.