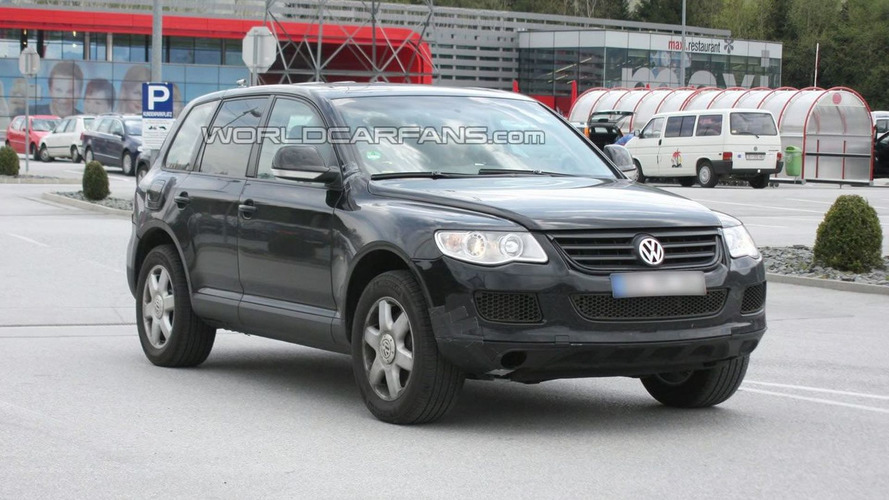 Spy pictures of the next-generation 2010 VW Touareg were taken while the SUV was undergoing testing. Interior shots reveal a Golf VI steering wheel and a redesigned instrument cluster.

The next-generation Volkswagen Touareg is due towards the end of 2010. Pretty soon we should have a more regular supply of spy shots featuring the big VW. For now this prototype which was testing in the mountains using the current facelifted body appears to be a powertrain mule for the new V6 TSI hybrid engine.

Despite its rough mule form with alterations to the front bumper, the interior is showing changes as well.  Interior shots reveal the same three-spoke steering wheel found in the Golf VI plus a new speedometer cluster.

Same as the current model, the Touareg will share the same platform as the next Porsche Cayenne and Audi Q7. It will have more sporting attributes than before and will be styled to look similar to the Tiguan while at the same time adopting VW's new front grille.

Back in February Volkswagen announced this engine would be included in the next gen 2010 Touareg with an all-new 333 hp (245 kW) supercharged 3.0 liter direct-injection V6 petrol engine connected to an electric motor. This engine produces 440 Nm (325 lb-ft) torque starting at 3000 rpm. The electric motor brings another 38 kW (52 hp) and a massive 300 Nm (221 lb-ft) torque.