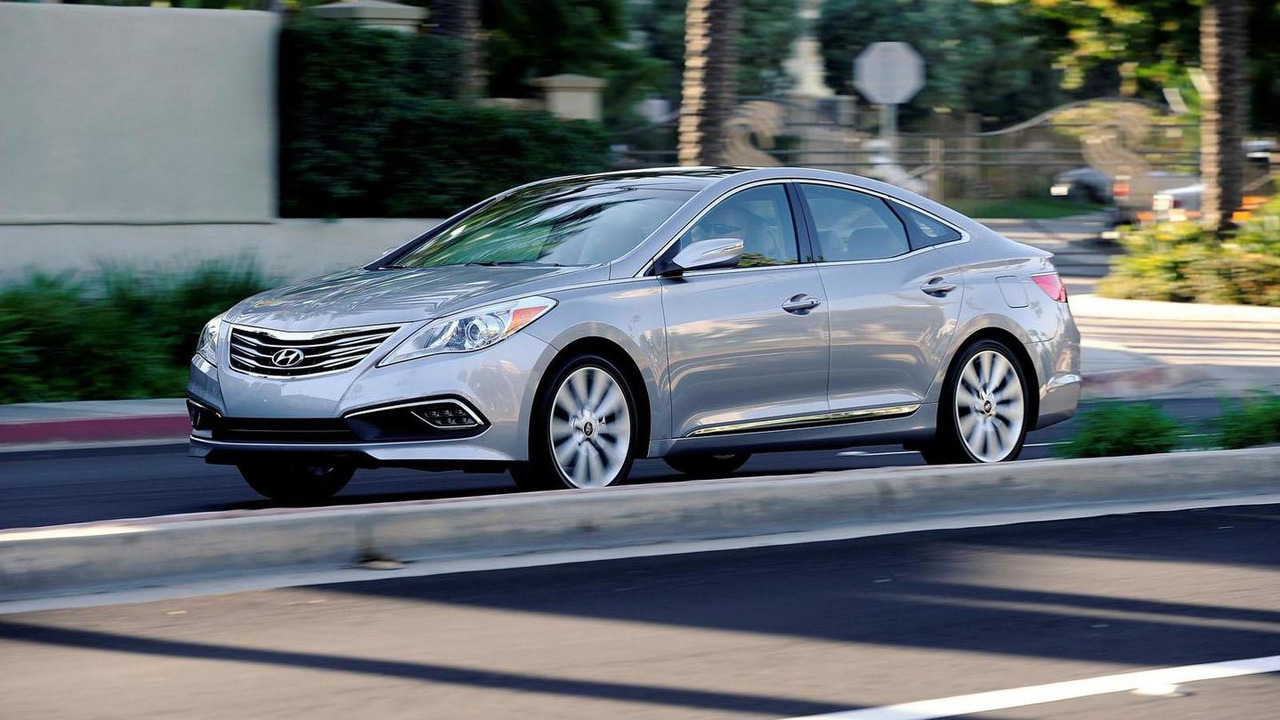 It will live on in Asian markets as the Grandeur.

Say goodbye to the Hyundai Azera, at least in the United States. The Korean automaker’s official word on changes for the 2018 model year include a revamped Accent and Elantra GT, not to mention the all-new Kona compact crossover. Other familiar models either carry over or receive modest facelifts, except for the full-size Azera sedan which officially exits the U.S. market. The car isn’t dead, however – it will continue on in its home market where it’s called Grandeur.

The move isn’t exactly surprising, as Azera sales in the U.S. have declined steadily in recent years. The current generation debuted in 2011, but after peaking in 2013 with just over 11,000 sold units the Azera entered a freefall. Even a modest facelift in 2015 couldn’t help the sedan regain momentum, selling just 5,539 models that year and less than 5,000 for 2016. Considering Azera competitors like the Chevrolet Impala and Toyota Avalon generally sell that many cars in a month, Hyundai’s decision to pull the Azera from American shores doesn’t really require an explanation.

There’s also the manufacturer’s upscale Genesis brand to consider. While the Azera was never a proper sport sedan, it did offer an upscale feel with plenty of options and a touch of luxury. By comparison, the base model Genesis G80 sedan has a starting price in the neighborhood of the Azera Limited, while offering similar features and superior all-around performance. In a segment that’s already packed and competitive, it could be easily argued that a new 2018 Azera would’ve simply been lost in the crowd despite a handsome redesign that will befall its Asian-market Grandeur twin.

With the Azera gone, the Hyundai Sonata inherits the role of top sedan in the manufacturer’s lineup. It’s a bit smaller in stature and lacks the Azera's glitz, but it has a refreshed look for 2018 along with a host of new options, including an eight-speed automatic transmission. For those who don't mind downsizing a bit, we found the Elantra Sport to be an entertaining machine to drive. Between these models and the G80, we suspect the Azera won’t be missed.

Below is a summary of changes to the Hyundai lineup for 2018 model year. This document will be updated regularly, creating a one-stop shop for the most up-to-date Hyundai vehicle lineup news. For additional product updates please subscribe to Hyundai News Alerts. You can also visit HyundaiNews.com for latest news on sales, pricing and technology. Please visit the product pages at HyundaiNews.com for more complete information. The models included in this guide are:

The 2018 Hyundai Elantra sedan is a carryover from the all-new 2017 model. Changes are summarized in the below chart.

The 2018 Hyundai Ioniq is available in three trims: Hybrid, Electric, and Plug-in hybrid. The Hybrid and Electric are carryovers from the all-new 2017 models. The Ioniq Plug-in Hybrid is all new for 2018.

The Sonata is redesigned for 2018.

The 2018 Sonata Hybrid and Plug-in Hybrid are still under development. Stay tuned for more information.

The Azera premium sedan has been a successful model in the Hyundai line-up for a number of years, with great style, comfort and generous amenities, all at a very appealing price point.

Over the last few years, however, the Hyundai and Genesis line-ups have continued to increase the appeal of their models. 2018 Sonata has increased its comfort, technology, dynamics, design and performance. In addition, though distinct from the Hyundai brand, the Genesis brand continues to broaden the appeal of its mid-luxury G80 and premium luxury G90 models with attributes appealing to buyers holding the Azera on the periphery of purchase consideration.

As a result, for the 2018 model year, Hyundai Motor America will no longer offer the Azera for the U.S. market, simplifying its model line-up and broadening the appeal of its core models.

The Hyundai Kona is an all-new CUV joining the Hyundai lineup in 2018.

HYUNDAI MOTOR AMERICA
Hyundai Motor America, headquartered in Fountain Valley, Calif., is a subsidiary of Hyundai Motor Company of Korea. Hyundai vehicles are distributed throughout the United States by Hyundai Motor America and are sold and serviced through 835 dealerships nationwide. All new Hyundai vehicles sold in the U.S. are covered by the Hyundai Assurance program, which includes a 5-year/60,000-mile fully-transferable new vehicle limited warranty, Hyundai’s 10-year/100,000-mile powertrain limited warranty and five years of complimentary Roadside Assistance.