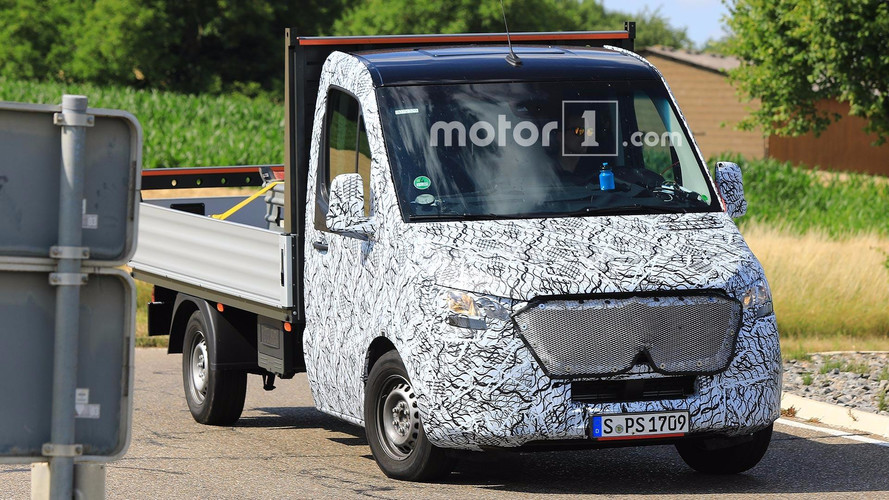 Mercedes will adapt the Vision Van Concept's smooth look for the road.

Mercedes-Benz is putting the next-gen Sprinter to work, and these spy shots reveal the hard-working model’s new nose. Previous photos didn't provide as good of a look.

The revised front end takes major cues from the Vision Van Concept. Narrow headlights wrap around the nose and connect to a broad grille. In profile, the overhang looks quite short, and there doesn’t appear to be much room under the little hood. The windshield rises high above the cabin. It appears that the vehicle would have lots of outward visibility and plenty of headroom. The upward sweeping beltline along the doors looks stylish.

On the Vision Van, Mercedes used a wraparound windshield that created a futuristic look.

The concept featured an electric powertrain with 101 horsepower (75 kilowatts) and a range of 168 miles (270 kilometers). However, this one has internal combustion power because the exhaust pipe is visible on the passenger side. Expect a lineup of diesel mills for the production model and a choice of rear- or all-wheel drive.

The Vision Van featured an on-board flying drone for delivering packages short distances. Don’t expect to find this futuristic feature on the Sprinter.

Inside, the concept had an intelligent cargo space that told drivers where the right package was for a delivery. The company estimated that the system could save up to four minutes per stop.

Mercedes has been working to overhaul its commercial vehicles lineup. For example, Urban eTruck Concept imagined an electric short-haul commercial vehicle for hauling goods. Its 212 kilowatt-hour lithium-ion battery offered a 124-mile (200-kilometer) range. The company is also close to entering the pickup market with the X-Class.