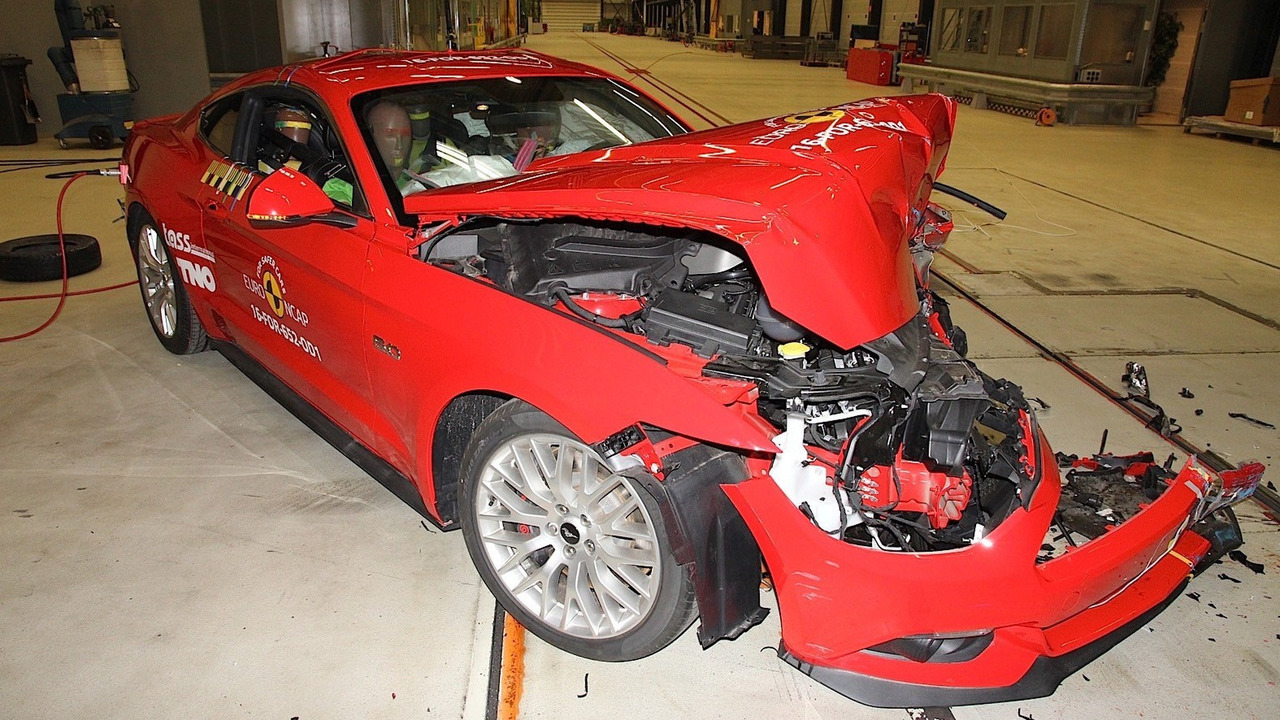 In January, the European New Car Assessment Program announced that the 2017 Ford Mustang received a dismal two-star rating, out of a maximum of five stars. Euro NCAP has now re-evaluated the refreshed 2018 ‘Stang, and the availability of additional safety tech has raised the score to three stars.

In Europe, the 2018 Mustang receives standard automatic emergency braking, pedestrian detection, forward collision warning, and lane-keeping assistance – these systems are optional in the United States. Ford also fits redesigned front airbags that keeps them from bottoming out during deployment. “The automatic airbag deactivation now meets Euro NCAP's requirements,” according to the group.

Despite the new nose, the safety agency reports that the 2018 Mustang is identical structurally to the pre-refresh model. Therefore, Euro NCAP didn’t perform new crash tests on the vehicle and instead used the results from the 2017 vehicle (pictured in gallery).

“While a three-star rating is unexceptional, the updates Ford have introduced have not only made Mustang’s safety better in key areas but also show that the company cares about its customers and safety reputation,” Euro NCAP Secretary General Michiel van Ratingen said in the new rating’s announcement.

A lack of safety tech was the major factor that gave the 2017 Mustang such a low score. For example, the vehicle didn’t come with rear seat belt pre-tensioners and load limiters. The driver and passenger front airbag also inflated insufficiently, and the rear test dummy slid underneath the seatbelt.

In the United States, the 2017 Mustang received a five-star overall score from the National Highway Traffic Safety Administration’s New Car Assessment Program – the highest possible rating. The model missed a Top Safety Pick designation from the Insurance Institute for Highway Safety due to an Acceptable result in the small overlap front crash test – Good scores are necessary to every evaluation to be a TSP.

Today, Euro NCAP published the safety ratings of six new cars and the rating of the Ford Mustang facelift. The Alfa Romeo Stelvio, Hyundai i30, Opel Insignia, SEAT Ibiza and VW Arteon are all awarded a maximum five-star rating; Honda’s new Civic gets four stars; and Ford’s muscle-car, the Mustang, gets three stars in its latest form.

The luxurious VW Arteon performed well in all areas of assessment, becoming the highest-scoring executive vehicle for pedestrian protection to date. Alfa Romeo’s new off-roader, the Stelvio, did exceptionally well in adult occupant protection, with a near-perfect 97 percent score, matching competitors like the Volvo XC90, assessed in 2015.

The SEAT Ibiza stood out for its high level of standard safety equipment. Other cars in this category often have autonomous braking as an option but the Ibiza’s system, which includes pedestrian detection, is standard equipment, helping it to a well-deserved five-star rating.

Euro NCAP Secretary General, Michiel van Ratingen, said, “The greater the extent to which these new technologies are fitted, the better and faster will be the progress in safety on our roads, to the benefit of all. It is to SEAT’s credit that they have made a sophisticated AEB standard on a supermini like the Ibiza, and we commend them for it.”

In the small family car category, Hyundai’s new i30 gets five stars with good performance across the board. The Honda Civic is let down by lower-than-expected protection offered to children, but is still rated as a solid four star car.

Earlier this year, the Ford Mustang scored disappointing two stars in Euro NCAP testing. Ford has responded by making AEB and Lane Assistance standard on its facelifted model and has introduced improvements on its frontal airbags. With these changes, the latest Mustang on sale has reached three stars.

Michiel van Ratingen, “It is good to see that after 20 years Euro NCAP’s call for safety improvement still strikes a chord with responsible companies like Ford. While a three-star rating is unexceptional, the updates Ford have introduced have not only made Mustang’s safety better in key areas but also show that the company cares about its customers and safety reputation.”