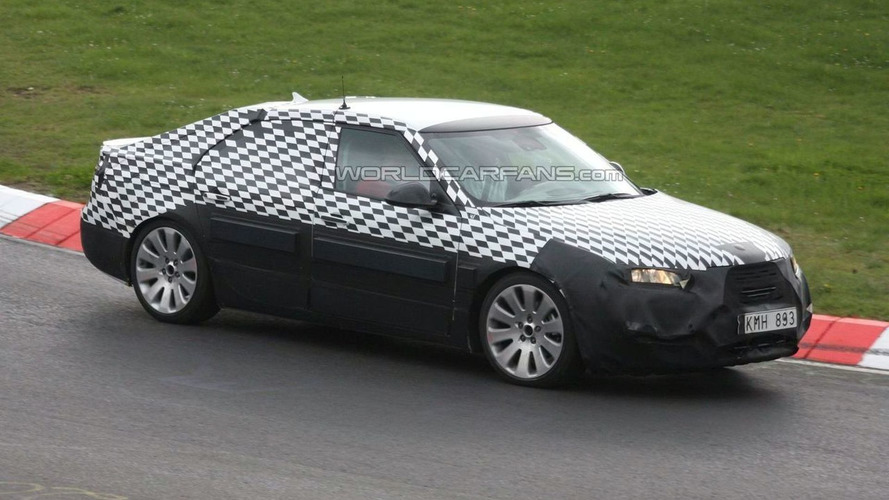 Spy photos of the 2010 Saab 9-5 have surfaced, as the new car tests at the Nurburgring prior to its expected Frankfurt Motor Show debut this year.

Clearer images have surfaced of the heavily-disguised 2010 Saab 9-5 caught on video recently during winter testing. The next-generation 9-5 was spied at the Nurburgring, wearing the same dazzle camouflage and heavy cladding, but some details are nonetheless visible.

The new car is clearly larger, with a long wheel base that suggests ample rear-seat legroom. Speculation calls for the new 9-5 to be almost six inches longer than the current car. The size increase will enable it to compete with vehicles like the Cadillac STS, BMW 5-Series and Audi A6, not to mention the Volvo S80. The wheels and vehicle silhouette visible in these photos suggest that the STS and A6 are targets. The use of LED taillights is again visible, though the new 9-5's overall look seems to be conservative and evolutionary rather than radical.

No mechanical details have escaped as yet, but Saab still has access to GM's stable of engines for the time being, whatever the brand's future may be. That means a range of 2.0 liter gasoline and diesel engines, with about 210 horsepower from the turbocharged 2.0 gasoline four-cylinder. A 3.6 liter V6 and turbocharged 2.8 liter V6 are also possibilities. A choice of front- or all-wheel drive is likely, in keeping with Saab's current lineup.

The 2010 9-5 is due to be unveiled at the Frankfurt Motor show later this year.