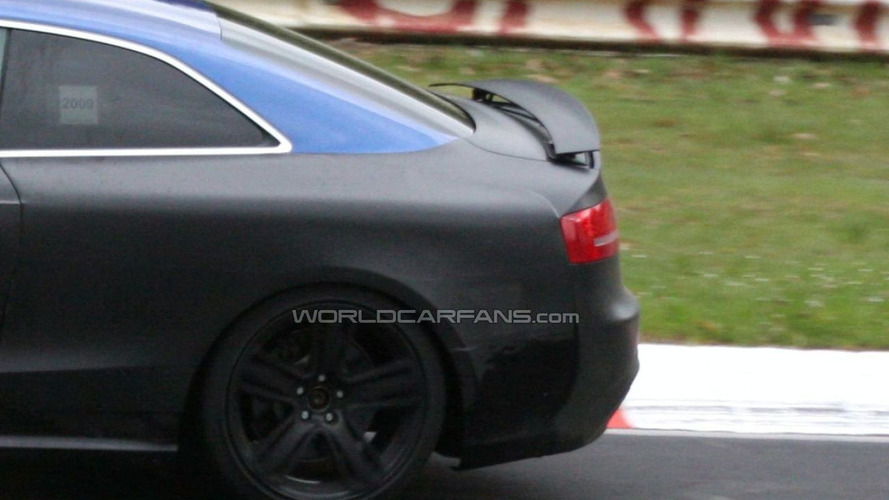 New spy pictures of the Audi RS 5 have thrown a different dimension to the car by revealing a new retractable rear wing. Subsequently rumours have pointed to a twin turbo lightweight version of the car for 2012.

These are the freshest spy pictures of the 2010 Audi RS 5. The two-door sports car is due to be launched in July 2010 according to the leaked Audi rollout schedule. This model seen testing at the Nürburgring was wearing a new retractable rear spoiler. Rumours have recently surfaced of a lightweight version of the car which harks back to the Ur-Quattro or "original" Quattro coupe of 1980.

It is said that this model will weigh in at less than 1,400kg (3,086 lbs) and be powered by a 425bhp (317kW) V6 engine running two turbos. This would be quite an achievement taking into account the fact that the Quattro weighed about 1,300kg (2,866 lbs). Information sourced from the German publication Autobild says the car will be ready in the year 2012 at a retail price of around €70,000.

By contrast the stock RS 5 is understood to be using the 4.2-litre V8 for its 450hp (331kW). Should it really achieve this figure it would be as powerful as the previous generation RS 6. It has an integrated rear spoiler, quattro AWD, two massive oval tailpipes and a choice of either a 6-speed manual or 7-speed DSG ‘box.