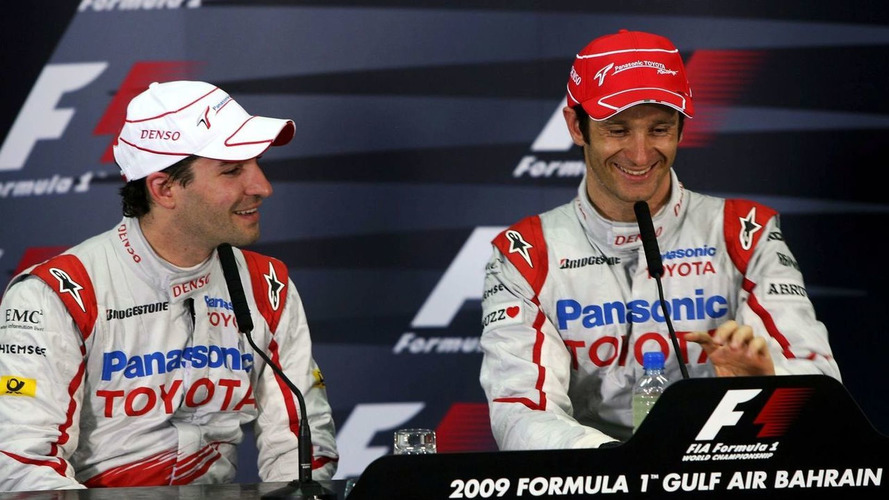 Toyota, with Jarno Trulli on pole position, dominated qualifying in Bahrain on Saturday, locking out the front row of the grid.

Toyota, with Jarno Trulli on pole position, dominated qualifying in Bahrain on Saturday, locking out the front row of the grid.

The Italian, still recovering with a gruff voice, kissed the front of his TF109 in parc ferme, having outpaced not only his teammate Timo Glock but the winners of the first three races of 2009, Sebastian Vettel (Red Bull) and Jenson Button (Brawn).

Precise car weights will be published later by the FIA, but Toyota team president John Howett believes the front row was achieved with a "combination" of aggressive strategy and true pace.

"I don't think we're excessively light but it's fairly aggressive," he said.

Brawn's Button, fourth, said in conversation with the BBC: "We don't have the pace we did in the first few races."

And in third, Vettel added: "I do think they (the Toyotas) are going to pull in (to the pits) a bit earlier, we'll see tomorrow."

World champion Lewis Hamilton was happy with his fifth place, while although just eighth and tenth, the two Ferraris made the final 'Q3' runout, which was watched on by VIPs including Eric Clapton and Richard Branson.

Both BMWs, on the other hand, including Robert Kubica whose F1.09 was breathing fire in the pitlane on occasion, dropped out in the second phase, and although at least out of the ignominious Q1 company, so too did Renault's Nelson Piquet.

"Sorry guys," said the gutted Brazilian on the way back to the pits, before his teammate Fernando Alonso went on to qualify seventh.

Adrian Sutil and Mark Webber spent the opening moments of 'Q2' talking in the Red Bull hospitality area, after the Red Bull driver was blocked under braking.

German Sutil, who drives for Force India and was apologising in person to his Australian rival, will almost certainly be penalised, but Webber can expect only to move up one place from his abysmal 19th.