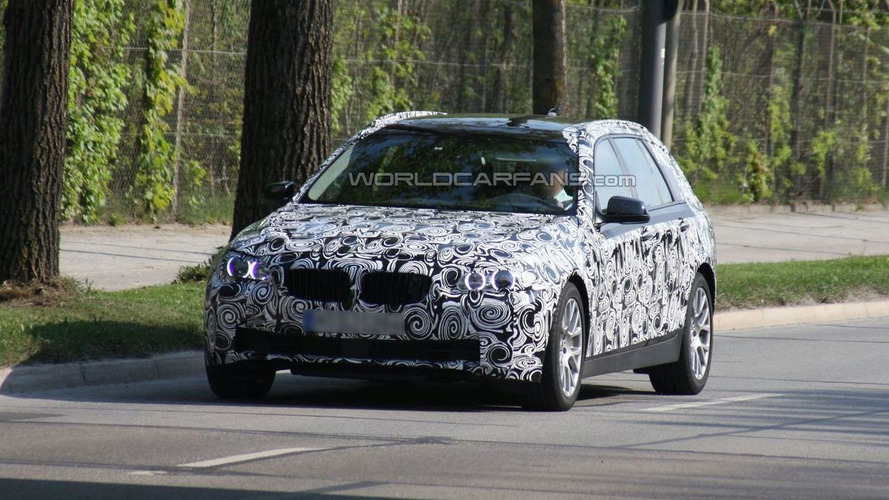 Next generation 5-series is expected in 2010, with this Touring model coming soon afterward. 5-series will come with a broad range of engines, from a possible 2.0 liter diesel to BMW's 4.4 liter, twin-turbo V8.

More spy photos of the BMW 5-series Touring have emerged and...hey, we're starting to get used to that funky camouflage paint job on this sports tourer. BMW, do you think you can make this part of the options package? Call it the 70s kitchen tablecloth pattern camo-finish, and throw in a complimentary pair of bell-bottoms too.

This Touring variant is expected to come to market in 2010, sometime after the introduction of the next-generation 5-series range. It will come with a few hints of the upcoming 5-series GT to its design, including features such as the new headlights, bonnet and grille looking a lot like those seen on the 5-series GT Concept.

Engines expected will include BMW's 3.0 liter twin-turbo and the 4.4 liter, twin-turbo V8, all with plenty of power output to keep the new 5-series healthily chugging along. On the diesel side, there may likely be a 2.0 liter twin-turbo borrowed from the 3-series range that can keep fuel economy down on this mid-sized 5-series range. BMW has also hinted at featuring the hybrid system from the 7-series on the 5-series as well.