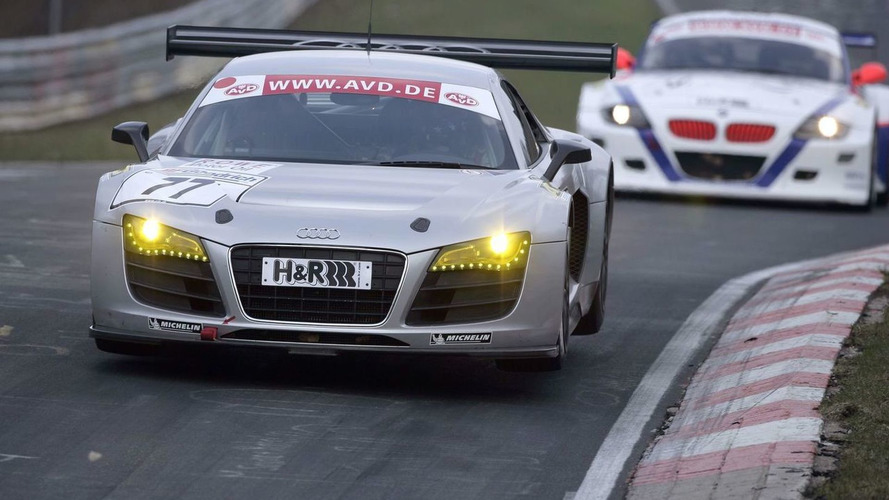 Four different Audi R8 LMS cars will be used by different teams during the 24-hour Nürburgring race, and we have all the details inside.

Four different teams will use the Audi R8 LMS during the 24-hour race at Nürburgring. ABT Sportsline, and Phoenix Racing  with two cars each, will be racing in the GT3 class during the event.

Remarking on the complexity of the Nürburgring-Nordschleife, Audi Motorsport chief Dr. Wolfgang Ullrich said, "Similar to Sebring for the sports prototypes, it is superbly suited for revealing the final improvement potential of any new race car."

"This is exactly what we're planning to do at the 24-hour race before delivering the R8 LMS to customers, starting this fall."

This will not be the first race appearance for the R8 LMS, which took a podium spot in the BFGoodrich Endurance Championship. The 500 horsepower racers will also be used in a test race on May 2, where each of the 14 driving team members for ABT Sportsline and Phoenix Racing will get their turn behind the wheel. Audi also points out the street cred of these drivers, five of whom are factory drivers for the company. The fourteen pilots have more than a dozen first-place finishes, with five of the drivers having already one at least once at the Nürburgring 24 hour race.

You can catch all the action on the Nürburgring, beginning with May 21 and 22 practice sessions. The 37th ADAC Zurich 24-Hour Race begins Saturday 23 May at 4pm central European time.