But it's only for Amazon Prime members, at least at first.

Amazon’s upcoming Prime Day on July 11 will include a preview of the second season of The Grand Tour exclusively for Prime members. 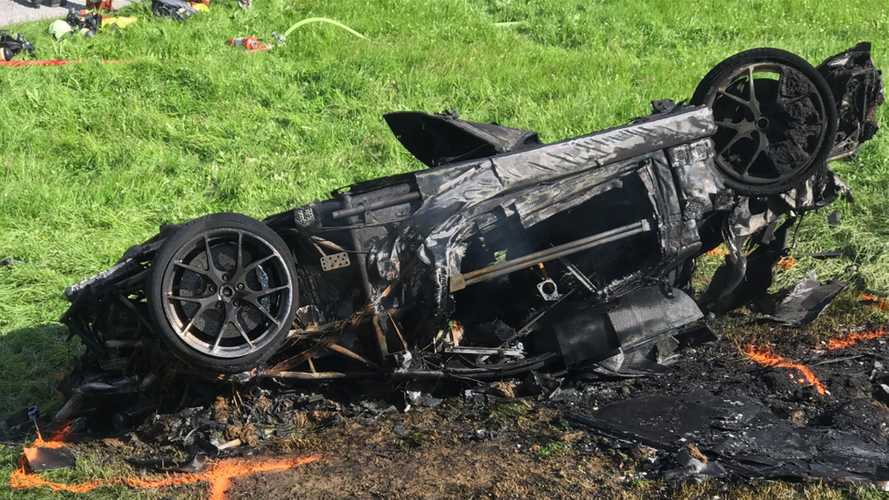 According to Amazon, the teaser will be the first look at the new footage for the second season, and the clip will show “Jeremy, Richard and James in Mozambique, Switzerland and the U.K.” The company’s announcement doesn’t reveal the preview’s length, but the mention of Switzerland hints there might be footage from Hammond’s crash there. If not, there’s still a chance we could see him fall off a motorcycle in Mozambique.

Amazon’s announcement says that The Grand Tour season 2 premieres “later this year.” Originally, the show was supposed to arrive in October, but Hammond’s crash might have delayed the launch date. According to Clarkson, the Hamster’s injuries have postponed the show’s production. The Tall One has been re-writing the program’s scripts to adjust for the Hamster’s inability to drive. May has been taking over on the production trips originally scheduled for Hammond.

The guys were driving supercars at the Hemberg Bergrennen hillclimb when the Hamster had his serious crash. Hammond was in the Rimac Concept One; Clarkson had a Lamborghini Aventador S; and May drove an Acura NSX. Video captured the moment when Hammond’s electric vehicle flew off a hill shortly after crossing the finishing line. Making the situation even worse, the Concept One burst into flames.

Hammond suffered a fractured knee that required major surgery, including replacing part of the joint with what the Hamster dubbed his Swiss Army Knee. While recuperating, he’s using an electric wheelchair to get around.

SEATTLE--(BUSINESS WIRE)--Jun. 29, 2017-- (NASDAQ:AMZN) – The third annual Prime Day will be Tuesday, July 11, with hundreds of thousands of deals exclusively for Prime members around the world. New this year, members can enjoy 30 hours of deal shopping starting at 6pm PT/9pm ET on Monday, July 10 – and new deals as often as every five minutes. Prime Day has expanded to 13 countries this year, and Amazon is bringing new and existing members in the U.S., U.K., Spain, Mexico, Japan, Italy, India, Germany, France, China, Canada, Belgium and Austria the best deals of the year. Members will find millions of items in stock, including deals from thousands of small businesses and entrepreneurs. As the company gears up for Prime Day, Amazon offers an inside look to show our global preparations. To participate in Prime Day, sign up or start a free Prime trial any time before or on July 11 by visiting amazon.com/primeday.

“Our members love Prime Day and we have been thrilled by the response over the last two years. It is inspiring us to make it even better this year for Prime members,” said Greg Greeley, Vice President, Amazon Prime. “Every part of our business is working to deliver more deals for a record number of shoppers. This year’s Prime Day is too big for 24 hours – so we’re giving Prime members 30 hours to shop!”

New for Prime Day this Year

Every day leading up to Prime Day on July 11 members will find all kinds of exclusive promotions and deals. The following start today:

As a Prime Day exclusive, Amazon will reveal a brand new tease of The Grand Tour for Prime members. The new footage, which is the first look at any filming from the hugely anticipated second season, sees Jeremy, Richard and James in Mozambique, Switzerland and the U.K. Prime members will get this exclusive Prime Day sneak preview ahead of the full The Grand Tour season 2 launch later this year.

“Prime Day provides young brands like ours the opportunity to reach new customers and gain greater exposure through deals and increased traffic,” said Caron Proschan, Simply Gum. “We are really excited to offer customers our best deals of the year and expect to see a huge sales lift that will help us prepare for the upcoming holiday season.”

“Prime Day last year was tremendous. We did 20 times our normal daily sales, it was simply amazing,” said Lawrence Bibi, Light Accents. “Prime Day gives us a peak sales day in the middle of the summer.”
Everyday Made Better with Prime

Prime was designed to make your life better every single day. Tens of millions of members around the world enjoy the many benefits of Prime. In the U.S. that includes unlimited access to award-winning movies and TV episodes with Prime Video; unlimited access to Prime Music, Audible Channels for Prime, Prime Reading, Prime Photos, Twitch Prime; early access to select Lightning Deals, one free pre-released book a month with Kindle First, and more. Plus, Prime members around the world can enjoy exclusive deal shopping on Prime Day. Prime was built on the foundation of unlimited fast, free shipping and members receive unlimited Free Two-Day Shipping on more than 50 million items, Prime FREE One-Day Shipping and Prime FREE Same-Day Delivery in more than 5,000 cities and towns, and two-hour delivery with Prime Now in more than 30 major cities. Start a free trial of Amazon Prime at amazon.com/primeday.