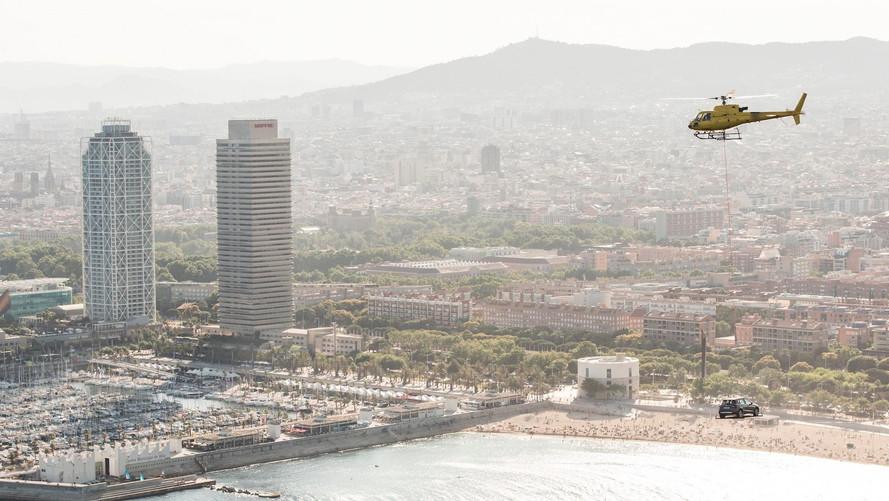 Fans of the SEAT brand waited anxiously for the arrival of the new Arona small SUV. Making its debut just a few weeks ago, the crossover rides on VW’s MQB platform – the same platform that underpins cars like the Golf and Atlas – and will rival the likes of the Nissan Juke and new Kia Stonic, just to name a few.

But before it hits the market, the Spanish marque wants to make sure that fans are well aware of the Arona’s, um, capabilities. In doing so, the company decided to dangle it from a helicopter more than 980 feet (300 meters) above the coast. Definitely a sight to behold, that’s for sure.

Sitting on a custom-built, H-shaped platform that provides stability during flight, the Arona dangled 65 feet (20 meters) below the helicopter, and took to the skies over Barcelona, Spain. A helicopter pilot with more than 15 years of experience was at the helm, thankfully, trained to maintain complete control of the aircraft and the vehicle below while in the sky.

The helicopter traveled at speeds of up to 40 knots (80 kmh/49 mph) while in the air, and flew more than 50 minutes at 980 feet (300 meters) above the Barcelona coastline. The extravagant display gave beach goers an early look at the SUV in the flesh prior to its June 26 debut.

Sadly, SEAT won’t deliver your Arona buy helicopter if and when you do decide to buy one. The all-new Arona comes powered by a 1.0-liter TSI turbocharged engine capable of producing 95 and 115 horsepower (70 and 85 kilowatts), paired to a six-speed manual or a seven-speed DSG. A larger 1.5-liter TSI engine is rated at 150 hp (111 kilowatts).

The Arona will make its in-person debut at the Frankfurt Motor Show in September before going on sale later in the year. No word on pricing, but expect a similar MSRP to the Skoda Kodiaq, which starts at £21,765 ($28,155) in the U.K.

Neither on the road, on a circuit or even displayed on a turntable at a motor show, but in the air. The first time a sneak peek at the SEAT Arona was given, it was hanging from a helicopter 300 metres above the sea. Below are some of the details about this aerial exhibition.

-Anchored on the fly: The car stands on a custom built, H-shaped platform for stability and safety during the flight. The pilot takes off unladen and releases the cable that attaches the platform with the Arona to the cockpit. A technician connects both anchoring systems and the car begins to rise, hanging 20 metres below the helicopter.

-Uncovered in mid-air: Shortly before taking flight, the privacy cover shielding the model is replaced with a red silk one. When SEAT’s first crossover reaches a height of 7 metres, four specialists on the ground remove the cover so the car will be visible from the air. Now it’s ready to start flying over Barcelona.

-Dexterity at the controls: With more than 15 years experience, the pilot of a helicopter with an external payload has to have specific qualifications. This professional is trained to manoeuvre with complete control over the load and is skilled at flying to hard to reach places and in windy conditions, such as mountains and ski slopes.

-Staying balanced: In order to perform a smooth flight with the car perfectly stable, SEAT technicians and engineers studied the weight of the model to ensure it would balance against the helicopter. This kind of flight with hanging cargo can only be carried out over the sea for safety reasons.

-High altitude filming: A second helicopter flies alongside to capture the best images. Although the pilot of the chopper carrying the vehicle cannot remain completely still, he skilfully hovers at certain moments so the other can take some of the most spectacular shots.

-The centre of attention: At a speed of 40 knots, around 80 km/hour, the new model flew over the Barcelona coastline for 50 minutes at 300 metres above the water, providing beachgoers with a sneak peek while enjoying the afternoon by the sea.

-Preview of the global launch: The Arona, SEAT’s first compact crossover, had its international presentation last 26 June. The next stop: the Frankfurt International Motor Show. How do you think it’ll get there?

SEAT is the only company that designs, develops, manufactures and markets cars in Spain. A member of the Volkswagen Group, the multinational has its headquarters in Martorell (Barcelona), exporting more than 80% of its vehicles, and is present in over 75 countries. In 2016, SEAT achieved worldwide sales of 410,200 units, the highest result since 2007.