Race-Ready Ferrari 'Daytona' Could Be Your Personal Track Toy 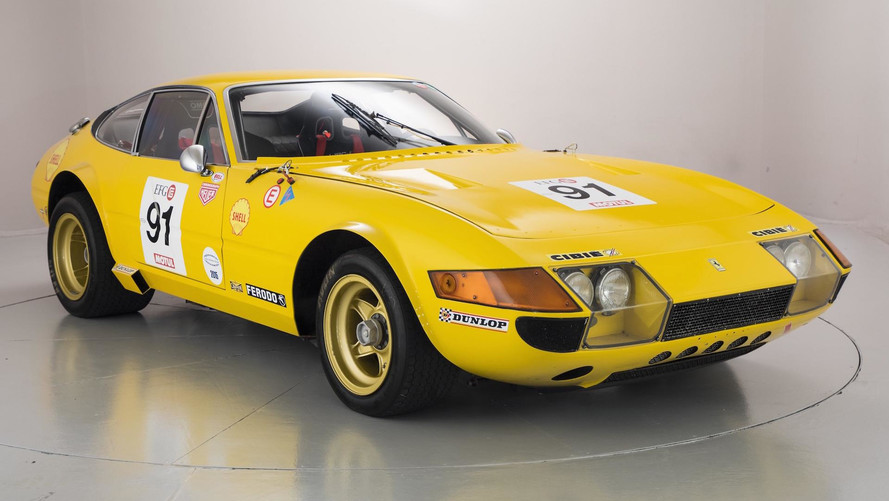 This rare Prancing Pony is up for sale in the U.K.

Ever dreamed of owning a classic Ferrari Daytona racer? Well now you can… sort of. Available through Hexagon Classics in the U.K., this stunning homage to Ferrari racing history can be in your driveway, if you’re willing to dish out some serious cash.

The rare 365 GTB/4 Competizione in question is finished in a handsome yellow paint scheme with an appropriate racing livery affixed. The exterior includes features like the number 91 plastered on the door panels, as well Shell, Dunlop, Huer, and other racing sponsor stickers throughout. Though this Ferrari never actually saw the track, it’s a stunning homage to racers of the past nonetheless.

Just a handful of these unique examples were built at the Ferrari factory's "Assistenza Clienti" department in Modena, Italy. This particular example, produced in 1973, boasts an aluminum hood and boot lid, as well as stretched flares around the wheel arches to accommodate the wider wheels and tires. It’s part of the second series of five built.

Under the hood lies a 4.4-liter Colombo V12, in this application tuned to produce 450 horsepower (335 kilowatts). It wears the chassis number 16935, and was converted into a Group 4 competition example sometime in 2001.

"It goes without saying that the Ferrari 365 GTB/4 has a unique story, ranging from styling to its racing pedigree and the origins of the name Daytona," Paul Michaels, chairman of Hexagon Classics. "I have had the privilege of dealing with a lot of Daytona’s in the past and this particular recreation is one of the finest examples I have ever come across."

The dealer doesn’t say how much this classic Ferrari will set you back, but other examples on the used market typically go for somewhere near $850,000. This one could be closer to a million when it finally does find its new owner.

The 365 GTB/4 is arguably one of the world’s most recognisable cars and was warranted the unofficial name of Daytona – created by sections of motorsport media to commemorate Ferrari’s exceptional 1-2-3 finish at the 1967 24 Hours of Daytona.

The Competizione has been inspected thoroughly by the team of experts at Hexagon. The car represents the racing version of the Daytona, which was first produced in 1969. Developed from the standard road cars, three series of five client competition examples were built at the factory’s “Assistenza Clienti” department in Modena. The 1973 model at Hexagon represents the third series, which boasts an aluminum bonnet and boot lid, in addition to the same increased flares around the wheel arches to accommodate wider wheels and tyres seen on the series 2.

The engine in the series 3 Competizione was the same as the 4.4 litre Colombo V12 seen in the road cars but was tuned up to pump out 450bhp. The last major representation of the cars pedigree was at the 1979 24 Hours of Daytona, where a 1973 car took victory in its class and 2nd place overall.

Introduced at the Paris Salon in 1968, the Daytona became an instant hit with rock stars and the privileged elite. Whilst many were displeased with the radically different design details of the 365 GTB/4, with its traditional rounded design replaced with a sharp-edged styling, all found the sheer speed of the car a joy to behold.

The Ferrari available at Hexagon, chassis number 16935, was commissioned around the turn of the century to be converted into a Group 4 competition example, bringing it up to the car’s original 1973 specification. It has since competed successfully in various historic events and comes complete with official FIA documentation.

Paul Michaels, chairman of Hexagon Classics, said: “It goes without saying that the Ferrari 365 GTB/4 has a unique story, ranging from styling to its racing pedigree and the origins of the name Daytona. I have had the privilege of dealing with a lot of Daytona’s in the past and this particular recreation is one of the finest examples I have ever come across. This highly documented model settled in the USA until its 1999 conversion into the original 1973 racer and is now in our North London showroom, after I personally gave it a close examination, ready to be taken straight to the circuits of the world.”

This remarkable Ferrari is now available to view at Hexagon Classics’ showroom in north London.

Hexagon Classics are world leaders when it comes to classic and modern classic cars. The showroom is always restocked and full of some of the world’s most sought-after heritage vehicles. The showroom has since become a cultural hub with the opening of Hexagon Classic Design, a new art gallery and a truly vibrant space, showcasing the form and the function of a wide mix of ranges, products and art.