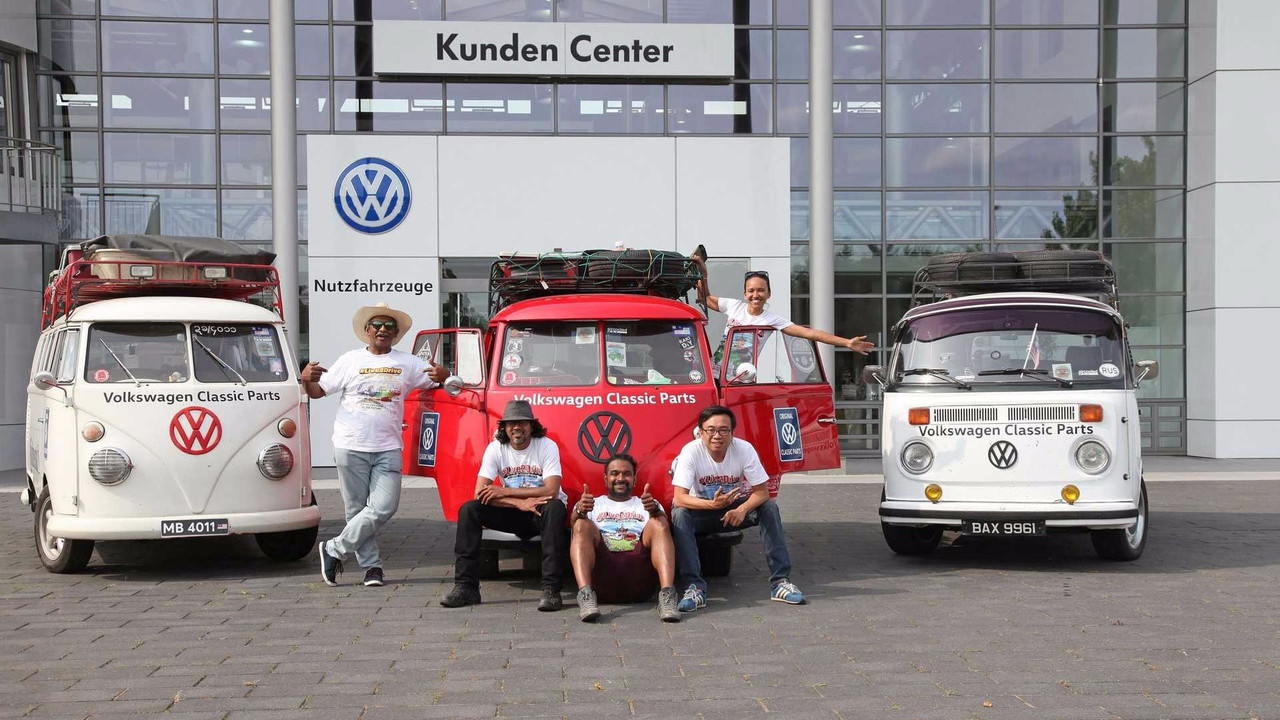 The three vintage Type 2 Volkswagens were joined by a Beetle, and the trip is only half over.

Fact: Volkswagen Type 2 bus owners love to take their beloved rides on road trips. That’s what led three Malaysian VW bus owners to embark on a 12,500-mile journey, spanning several countries and two continents. Their destination was Volkswagen’s Commercial Vehicles assembly plant in Hannover, Germany, where many T-series vehicles were made. For good measure, the trio of Type 2 Bullis were joined by a couple in a classic Beetle, and to answer the question everyone is asking right now, yes everyone arrived with their vehicles intact.

Which leads us to the second fact: A proper VW bus owner never, ever embarks on such a journey without spare parts. That holds especially true when the convoy consists of two 1967 models and one from 1978. We say this not to dig at the reliability of these old rigs, but to honor the enthusiasts who embrace not only these iconic rides, but the entire lifestyle that makes them special. The sheer simplicity of the air-cooled Type 2 means just about any mechanical malady can be handled with a basic set of tools, and though we don’t know how many hours of the three-month journey were devoted to roadside repairs, the group was indeed packing the necessary components to handle just about anything.

12,500 miles over three months works out to roughly 138 miles per day, so speed certainly wasn’t part of the agenda. The route took the caravan through Thailand, Laos, China, and Russia before finally making it to Europe. We'll admit to being extremely jealous of the sights these travelers must’ve along their journey.

That journey, however, is only half over.

Having made it to Germany with their Bulli - Beetle fleet, the VW road-trippers are headed onward to Belgium, France, and Scandinavia, visiting orphanages and participating in various charitable events along the way. Eventually the trip will conclude back in Malaysia, at which point the vintage air-cooled Volkswagens will have covered 31,000 miles.

It sounds like one hell of an awesome adventure.

FROM MALAYSIA TO HANNOVER: VOLKSWAGEN FANS COVER 12,500 MILES IN VINTAGE BUSES TO REALISE THEIR DREAM

Hannover / Kuala Lumpur, 30 June 2017 – It was the Bulli journey of their lives: three months, two continents, 20,000 kilometres (12,420 miles) and one destination: the Volkswagen Commercial Vehicles assembly plant in Hannover. At the beginning of March, five Volkswagen fans left their homeland in Malaysia in three Bullis and one VW Beetle. On arriving in Hannover they were greeted warmly at the production site and even allowed to bring their vintage vehicles into the factory halls where they observed production of the latest T-Series model.

Cliften Nathaniel (T2), Terence Moses (T1), Stephen Pang (T1), Monica Xavier and Udhaya Kumar (Beetle) have arrived at their destination. Proudly they drive their cult vehicles onto the production site where they are given a warm welcome by Friedrich Mattiszik (Production). “We know that we have Bulli fans across the globe. But to see them travel to us from such a distance in their vintage vehicles – we have never experienced this before. It is an honour for us to show our plant to these globe-trotting fans. This is, so to speak, the birthplace of the vast majority of T-series vehicles.”

Stephen Pang: “This is a dream come true for us. We always wanted to go to the place where the Bullis were built. Now we not only know how quality vehicles drive, but also where they originated over the vehicle generations. It is impressive how perfectly humans and robots work together and how large the factory is.”

Their route in the Bullis (two from model year 1967, one from 1978) passed through Thailand, Laos, China, Russia and Europe. Terence Moses: "Bullis are simply indestructible. And when they do need repair, we can usually handle it ourselves." To ensure this was possible, they had tyres, replacement parts and tool sets lashed to their fully laden roof rails, along with countless pieces of luggage.

Another highlight for the Malaysian Bulli owners was their weekend visit to the Volkswagen vintage meet in Hessisch-Oldendorf (Lower Saxony). Around 45,000 fans attended this event to admire 900 vehicles from 28 countries, including from Malaysia. For the fans, it goes without saying that Bullis are far more than just cars: works of art and love, and an expression of an entire lifestyle.

After their stop in Lower Saxony, the Bulli fans take to the road once again to visit countries including Belgium, France and Scandinavia as part of their mission. They are visiting orphanages in various countries and participating in a number of charitable events for their #Live2drive campaign. After travelling a total of 50,000 kilometres (over 31,000 miles), the trip with their vintage vehicles finishes in Malaysia.